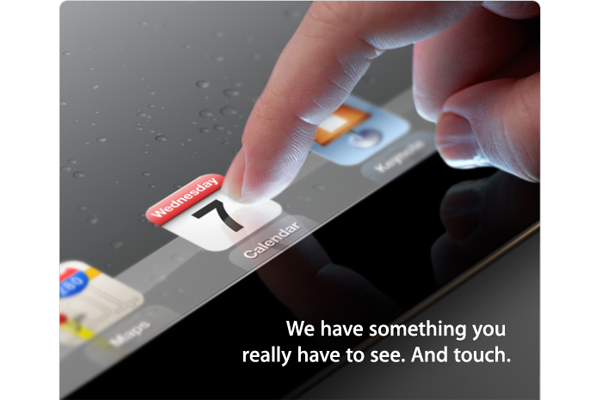 Today Apple sent out email invitations for an event on March 7, which blogosphere rumors predict will be the announcement of the new, highly-coveted iPad 3.

“We have something you really have to see. And touch,” states the invitation, which also says the event will be held at the Yerba Buena Center for the Arts in San Francisco at 10AM PST nextÂ  Wednesday.

As usual, Apple is hush about the event, but leaks about the iPad3 have been surfacing since the start of the year.

If these rumors are correct, the iPad 3 announcement will reveal a tablet with edges that are more tapered than the iPad 2, a larger 8-megapixel camera, enhanced screen with four times the resolution of its predecessor and Siri for iPad. This feature is highly anticipated, since the iPad 2 did not get an enhanced retina display similar to the iPhone 4.

Equipping the iPad3 with the capability to run Siri may be the driver behind some of the expected increase in processor speed and higher wireless speed on a 4G LTE network. Reports differ as to whether the processor will be a dual-core processor–only a slight upgrade from the iPad 2–or a quad-core processor, which would put the iPad specs in closer competition with Android tablets.

Apple’s mobile operating system, iOS 5.1, was just recently announced so it makes sense that the new iPad3 will be updated with it. Apple says the iOS5.1 has an easier user interface that is more intuitive and has Twitter, location updates, and a split keyboard integrated into the OS.

The larger 8-megapixel camera will help produce better quality photos and videos for sharing on large screen formats, while Airplay mirroring in iOS5.1 will allow users to share everything they do from their iPad onto a widescreen TV. With it the tablet will respond to portrait and landscape rotations, pinch swipes, and zooms without being tethered to the TV.

If the announcement happens, pre-orders for the iPad 3 could be available that same week.