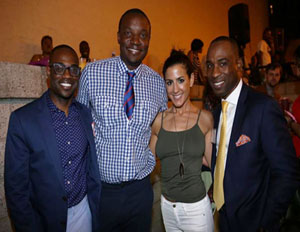 The “HELLO Harlem” launch, which was sponsored by AQUAhydrate, The Harlem Brewing Company, Sean John and Ciroc, and supported by Harlem Park to Park, featured remarks by Kai Wright, REVOLT TV vice president of communications, and Shirley Lewis, BGCH chair, along with a special presentation by the children of the BGCH. The evening also featured a performance by Grammy-nominated artist Luke James, who sang Michael Jackson’s “The Way You Make Me Feel” as well as his hits “Make Love To Me” and the Grammy-nominated single, “I Want You.”

The HELLO Harlem summer series will continue July 14 to September 8, 2014.