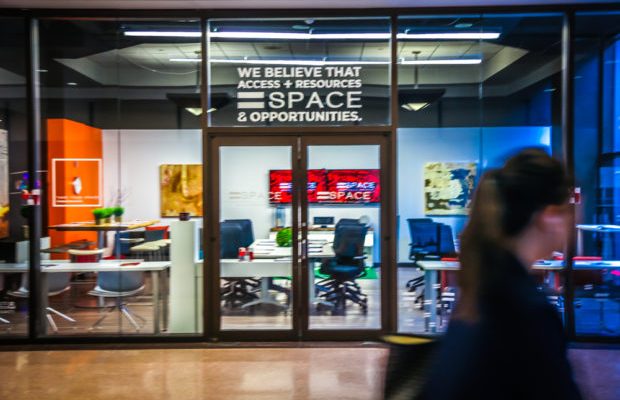 At the forefront of a great technology revolution, Newark, New Jersey, is becoming the next booming tech hub.

Much of this advancement is made possible through Newark Fiber‘s Firebolt Wi-Fi; one of the fastest in broadband technology to date, offering up to 10,000 MB speeds to many Newark facilities and parks.

The possibilities for many incoming tech innovators and entrepreneurs are endless, while being surrounded by tech powerhouses like Audible, Panasonic, Newark Venture Partners, and more.

Medina (who goes by that single name) and his co-founders Sean Hairston (CEO) and Rafael Roman (COO) of Medina=Citi, a Newark-based tech-enabled design agency, saw this growing potential nine years ago, when starting their business.

“Technology is the great equalizer for brown and black startups,” said Medina when discussing opportunities for minority business owners and their specific programs supporting marginalized groups.

Rooted in social impact, culture, and philanthropy, =SPACE  was first developed through the founders’ parent company Medina=Citi, which initially funded the startup.

“We were very culture driven. Medina=Citi was really the birthplace where the culture of = Space came up. Nine years ago, no one was really focused on culture and treating their working team like individuals,” explains Medina.

“It was an organic transformation that =SPACE grew out of. Every member that is a part of this ecosystem has a responsibility,” says Hairston.

To create lasting change within their communities, the three founders make it a point to invest in rising talent early, while exposing youth of varying backgrounds to their tech space and job opportunities. “We were developing this hub. And we were betting on early startups that went on to become (something great),” says Roman.

Inclusiveness is a top priority. Hairston says, “We want to make sure that all of our voices are heard—whether black, brown, or LGBTQ.”

At the helm of innovation, =SPACE  has been a living laboratory where entrepreneurs can grow; not just have a place to rent space and use Wi-Fi. Building close relationships with key partners, including the New Jersey Institute of Technology, has helped provide resources to grow.

The =SPACE team is also committed to exposing high school students to careers in technology and entrepreneurship. They offer three internships per year giving students insight into the startup life.

Even young students are welcomed. Marley Dias, 12, founder of the #1000BlackGirlBooks campaign, recently attended an =SPACE arts and tech event. Dias is known for her mission to collect and donate books that depict black girls as the main character.

Surrounded by neighboring colleges like Rutgers University-Newark Campus, New Jersey Institute of Technology, and Essex County College, =SPACE  has also engaged with and provided many college students with real portfolio work and opportunities. “This year we are piloting an early college program this summer for newly admitted college students. We are giving them as much exposure as we can within this field,” says Medina.

=SPACE is located in the downtown Newark arts and business district at 2 Gateway Center. It offers business coaching, workshops, live podcasts, events and more from entrepreneurs at all stages of development.