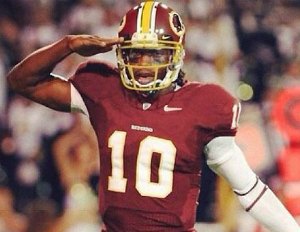 You know you’ve got a star quarterback when the President of the United States — between running the country and campaigning to keep his job — mentions your name amid a hotly contested political race, but the immensity of the occasion called for it.

After all, it seemed the Washington Nationals were headed to its first-ever NLCS; leading 6-0 at home against the St. Louis Cardinals, when they suddenly surrendered four runs in the top of the ninth inning and lost, 9-7, breaking the collective heart of a town and region longing for its first championship title in 20 years. That was Friday night.

Days later, the rookie quarterback capped a 38-26 victory over the Minnesota Vikings with an electrifying 76-yard touchdown run at FedEx Field, where the team hadn’t won in more than a year. People are already calling it one of the greatest D.C. sports moments of the last 15 years.

And, of course, there’s the president’s statement.

“He did comment on the restoration of faith in Washington sports teams created by RGIII’s remarkable performance in the Redskins game,â€ Obama spokesman Jay Carney said Monday, adding that the president thought the Redskins quarterback’s performance in Sunday’s game against the Vikings was “remarkable and helped boost the city’s spirits after a dispiriting Nationals playoff loss last week.â€

President Obama, who embraces the mayoral role of sports in a mayor-less city, is not the only one approving this message.Â Through six games, the Redskins hold a respectable 3-3 record heading into this weekend’s matchup with their NFC East rival New York Giants. The hype leading up to his second-overall selection before he ever played an NFL down seems justified now — and Griffin has lived up to it with panache.

Among the brands endorsed by Griffin III are Adidas, Subway, Gatorade, EA Sports, EvoShield, Nissan and Castrol Motor Oil. The sheer volume of deals was unprecedented for an NFL rookie.

“Overall, marketers have been extremely impressed with Griffin’s poise in satellite interviews (he’s great at remembering brand message points) and in commercial shoots,” ESPN sports business insider Darren Rovell reported of Griffin III’s appeal before the season. “That’s why he has earned more than any other rookie in NFL history before throwing his first regular-season pass.”

To many, that Griffin III surpassed even the No. 1 draft pick (Indianapolis’ Andrew Luck) in endorsements was a sign that he encompassed the full package.