Riding the Wireless Wave to the Stars 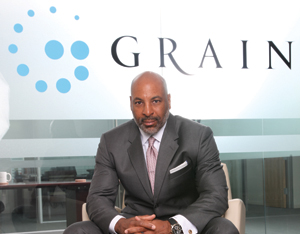 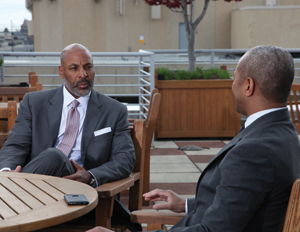 In 1984, after completing his studies at College of the Holy Cross in Worcester, Massachusetts, Grain went on to earn an M.B.A. from the Tuck School of Business at Dartmouth. He began his career on Wall Street at Drexel Burnham, under the tutelage of Michael Milken.

Milken, known as the “junk bond king,â€ helped define leveraging by planting corporate money in the financial markets. He served two years on a 10-year prison sentence for violating U.S. securities laws. Grain says Milken, as well as others at Drexel, showed him that wisely leveraging money is powerful.

“Having the opportunity to work there was a life-changing experience. Understanding what’s possible was really ingrained in that experience,â€ says Grain.
Grain also valued the fact that race wasn’t an issue with Milken.

“One of the reasons I joined Drexel, was that Drexel Burnham backed Reggie Lewis to buy TLC Beatrice from KKR. That told me that this was an opportunity to work with people where it didn’t matter what color you were or where you were from. It was about getting the deal done.â€

“He’s had challenges where people have placed limitations on him. You either get defeated by them or you say, ‘I can do better.’ He just goes out and does better,â€ says Stobaugh.
After leaving Drexel Burnham in 1990, Grain remained on Wall Street for most of the next decade doing deals at Morgan Stanley. In 2000, he left Wall Street when AT&T asked him to run the New England region of AT&T Broadband. After taking the division from $936 million in annual revenues to $1.6 billion, he left for Florida and joined Global Signal in 2002.

Strong role models
Grain is the youngest of seven children, all of whom have gone on to achieve great success.Â  His siblings include a neurosurgeon, a computer scientist, and a teacher.

He and his family lived in the Bedford-Stuyvesant section of Brooklyn until his early teens. His father, Walter Grain, used his experience as a U.S. postal worker to start a package delivery business. His grandmother, Elizabeth Shaw, was also business-minded. She was a landlord and owned several tenement homes and brownstones in Brooklyn in the 1960s.
“Seeing how she dealt with people, where she showed sympathy and mercy on people who were late with their rent and had financial challenges, had a big impact on me,â€ says Grain.