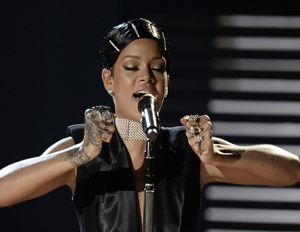 As an entertainer, Rihanna can push boundaries, but for everyday working women, not so much. (Image: File)

According to reports, luxury Parisian fashion brand Balmain has tapped pop star Rihanna to be its new front-woman. Deemed an “inspiration” and “icon” by the label’s creative director, Olivier Rousteing, the songstress stars in the forthcoming spring/summer 2014 campaign. The advertisements will appear in magazines starting January, notes Vogue.

“In front of the camera, she makes you feel like she is the only girl in the world,” Rousteing told the fashion magazine. “When the woman that inspires you wears your creations, your vision feels complete.”

This brand joins Armani Jeans among fashion campaigns for the Barbados-born singer, known for being a style trendsetter. Elated about the new gig, she tweeted: “Guess who’s the new BALMAIN Woman???!!!!!!! #BALMAIN #MommaImadeIt #CaribbeanGalRunTing.”

No stranger to pushing boundaries and innovating when it comes to style and music, Rihanna also co-stars and serves as executive producer for Bravo TV’s “Styled to Rock,” a reality TV competition for fashion designers.