Rihanna Reveal: How Millennials Can Channel the Greats for Career Wins 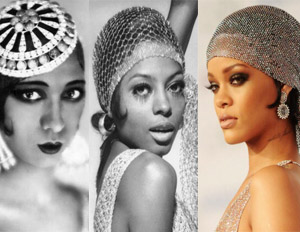 Everyone’s talking about the top fashion moments from the annual Council of Fashion Designers of America Awards, with celebrities making the best and worst dressed lists. Pop superstar Rihanna dominated TV news as well as the Web, with many in awe—and some in utter shock or disgust— about her risque, yet fierce gown made of almost nothing but Swarovski crystals. The singer, well-known for her out of the box fashion and antics, took home the CFDA’s Fashion Icon award, which was presented by Vogue editor Anna Wintour.

Rihanna, along with entertainer and fashionista Solange, who also dominated best-dressed lists, channeled entertainment icons Josephine Baker and Diana Ross, both women who pushed limits in terms of expressing the authenticity of their brands and styles.

Baker, an iconic pioneer dancer and singer, broke racial boundaries in Europe, becoming the first African American woman to star in a major motion picture, and an active force in assisting the French Resistance in World War II.

Named by Billboard magazine as the “Female Entertainer of the Century,” Ross too broke barriers in entertainment, known by many as the driving force of the success of Motown’s top-selling act, The Supremes, and becoming an international sensation as a singer, actress, and producer.

(Both were also known to reject typical fashion and red-carpet norms, and walk their own lines, whether people liked it or not.)

Now, before anybody comes for me, I’m not talking about Rihanna in terms of being a role model, nor am I directing young professionals to dress inappropriately for the office or work-related events such as galas and fundraisers.

What I am saying is that millennials should take a cue from the CFDA’s red carpet—beyond the obvious fashion elements— in terms of channeling the greats of their industries and being leaders by strategically pushing boundaries. Somewhat like Pharrell’s big hat moments, millennials can draw direct inspiration from the greats of their industries in forging their own boss moves.

For example, I absolutely love fashion and will often follow my favorite blogs to find out how to put together a great look—sometimes down to the last detail. I often go to sites like Atlantic Pacific or The Fashion Bomb and will totally plan my shopping list around the items recommended or worn. In the same way, millennials can model their action plans around the moves of leaders in their industries. If you’re mimicking tried-and-true tactics of great leaders, how can you go wrong? Also, once you know the foundation to success, you’ll often build a solid habit that can then be the springboard to your own unique branding and boss moves. You can put your own flair and style to it, just as you would an outfit or fashion choice.

Channel the boss moves of the leaders of your industry at every chance, especially before you’re about to go on an interview, give a presentation or make any decisions in your career. Ask yourself the following questions:

1. How do the greats approach this? What has historically worked in their favor? Read up on the successful people in your field. If they’re well-known, create Google alerts about them so you can keep up with what they or their companies are doing.

2. What would my mentor or sponsor do in this situation? What have they done in the past that either worked or flopped? Gain insight by reading biographies, blogs or other reference material, and scheduling quick chats, if possible, with mentors or sponsors at your company or in your industry.

3. How can I replicate, yet add my unique talents and skill set to not only pull it off but stand out in the process? Create a plan that incorporates elements of their paths to success that are still relevant today. Find ways to remix what might seem old-school but in essence are great career advancement tactics.

These steps will give you a great place to start in your path to become a force to be reckoned with in your career.

What industry greats do you channel for inspiration to make boss moves? #Soundoff and follow me on Twitter @JPHazelwood.