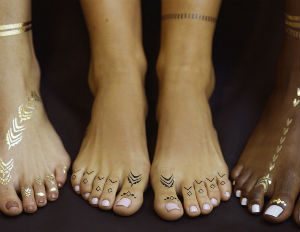 “While on her vacation, Rihanna felt that removable tattoos was the next adventure she wanted to share with all her fans. She approached me with the idea and of course, I was flattered, saidÂ Jacquie Aiche during an interview with Rihanna Daily.

“Rihanna wanted to share her vision with all of her fans and being able to create removable tattoos was â€‹an â€‹exciting â€‹adventure. It was the best of both worlds, her tattoos withâ€‹ the essence ofâ€‹ my jewelry was â€‹perfect for her fans to enjoy.”

Rihanna is no stranger to theÂ body art trend, so it should come as no surprise that she was fully involved in the creative process.Â “Creating the tattoos was a really collaborative process between Rihanna and myself, which we feel is so evident in the final designs,” Jacquie said in a press release. Â “There are gothic tattoos, but then we mixed in lots of daintier pieces for layering that are reminiscent of the way we stack our jewelry.â€ The process was so much fun we decided to make another round, as well. Something a little softer andÂ sexier with some unexpected inspiration. Stay tuned.â€

For $27 you can own a set of the metallic gold/glow in mix and match styles designed by Rihanna and exclusively sold onÂ Jacquieaiche.com.