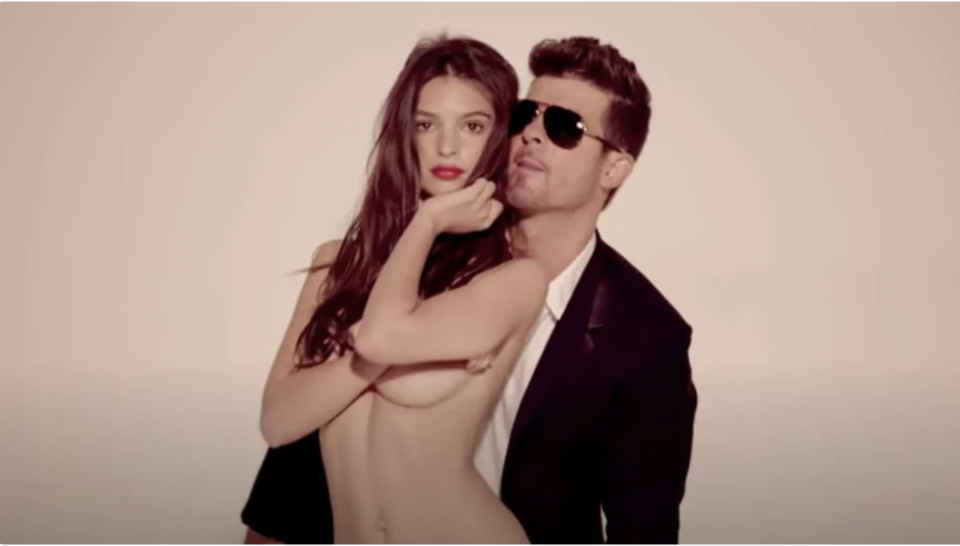 One of Black America’s favorite white crooners singing Black music – Robin Thicke – has come under fire after Emily Ratajkowski accused him of grabbing her bare breasts while making the video of Thicke’s 2013 hit single “Blurred Lines.”

According to the Daily Beast, Ratajkowski, the singer’s love interest in the video, revealed the incident in her upcoming book “My Body,” due out next month.

“Suddenly, out of nowhere, I felt the coolness and foreignness of a stranger’s hands cupping my bare breasts from behind. I instinctively moved away, looking back at Robin Thicke,” she wrote.

The former model also claimed that Thicke appeared to be drunk on the “Blurred Lines” set. She described feeling “the heat of humiliation” and “naked for the first time that day.”

For most of the video, Ratajkowski was partially naked.

“I didn’t react—not really, not like I should have,” she wrote.

The story gets worse.

Although this is the first time the “Blurred Lines” director said anything publicly about the alleged sexual assault, Diane Martel backed up Ratajkowski’s story saying, “I remember the moment that he grabbed her breasts, one in each hand. He was standing behind her as they were both in profile. I screamed in my very aggressive Brooklyn voice, ‘What the f–k are you doing? That’s it! The shoot is over!’”

Ironically, Martel defended the video and the song’s lyrics after Thicke was lambasted for his creep-worthy lyrics and for being misogynistic.

“I wanted to deal with the misogynist, funny lyrics in a way where the girls were going to overpower the men. Look at Emily Ratajkowski’s performance; it’s very, very funny and subtly ridiculing,” she explained. “That’s what is fresh to me. It also forces the men to feel playful and not at all like predators.”

“I directed the girls to look into the camera, this is very intentional, and they do it most of the time; they are in the power position. I don’t think the video is sexist. The lyrics are ridiculous. The guys are silly as fuck. That said, I respect women who are watching out for negative images in pop culture and who find the nudity offensive, but I find [the video] meta and playful.”

Even in 2013, Thicke put himself on the creep radar after saying, “People say, “Hey, do you think this is degrading to women?” I’m like, ‘Of course it is.’ What a pleasure it is to degrade a woman. I’ve never gotten to do that before. I’ve always respected women.” So we just wanted to turn it over on its head and make people go, “Women and their bodies are beautiful. Men are always gonna want to follow them around.”

In another 2013 interview with Salon, Thicke chalked his slimeball antics up to watching his deceased father, Alan Thicke of Growing Pains fame, be a P-I-M-P. (Thank you, 50.)

“My dad was single my whole pubescent period. He had Ms. Alabama, Ms. Dominican Republic — every week. I was like, Dang, Pops. He had an indoor Jacuzzi, and he frequented it. The first time I saw a naked woman was when I went to take a shower one morning before school.”

His ex-wife Paula Patton divorced him in 2014, citing infidelity, drug abuse and physical abuse. The two were together for 21 years and married for nine years.

Thicke has not responded to the allegations.