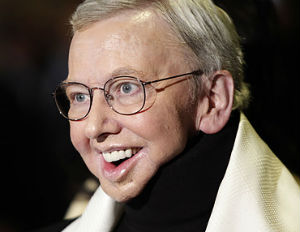 The infamous film critic Roger Ebert popularized the “two thumbs up”-style of reviewing with his late “At the Movies” partner, Gene Siskel who died in 1999.

Ebert died today at the age of 70 after a bout with cancer.

Here are 10 facts you may have not known about Ebert.

3. In 2004 he was the first film critic ever to be awarded a star on the Hollywood Walk of Fame.

4. The Director’s Guild of America recognized him with an Honorary Life Member Award.

5. Ebert reviewed more than 200 movies a year for the paper, Chicago Sun-Times’ stating days before his death that he would be taking a leave of presence stating, “At last to do what I’ve always fantasized about doing: reviewing only the movies I want to review,”

7. The annual film festival Ebertfest (founded in his honor), now in its 15th year, will continue at the University of Illinois in Urbana-Champaign, where he went to school.

8. Ebert planned on launching a Kickstarter campaign to bring “At the Movies” back to television. A new version of it was canceled in 2011.

9. Ebert also announced days prior to his death that he would purchase his popular website Rogerebert.com from the Sun-Times’ owners and relaunch the site.

10. He has written more than 15 books, including his annual movie yearbook which is predominantly a collection of his reviews of that year.