The Role of Police in K-12 Schools 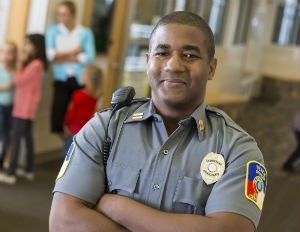 Many of you know that I homeschooled my children for eight years. Before I could work at Black Enterprise full time, I needed to find a high school for my daughter.

We visited a school in Williamsburg, Brooklyn. The first thing we noticed were the security guards, metal detectors, and conveyor belt for screening our bags. We couldn’t go any further into the building without going through security.

I tried to make light of it, but my 15-year-old daughter didn’t like it. “I don’t want to go to a school that has metal detectors,â€ she told me.

Needless to say, my daughter did not enroll in that school.

But security guards, or school resource officers–their actual title–are a reality in schools across the country.

On September 8, the Department of Justice’s Office of Community Oriented Policing Services announced a new rubric that it will require local police agencies to follow in order for them to receive federal funding, The Hechinger Report recently reported.

In a press call, U.S. Secretary of Education John King said that school resource officers, or SROs, should play a role of building “trust between schools and law enforcement and … keep students safe,â€ The Hechinger Report writes.

Yet the goal of student safety seems complicated, in light of incidents that could be described as brutal.

According to an analysis that The Hechinger Report and Huffington Post completed in August, school resource officers used Tasers or stun guns on 84 students, if not more, in the past five years alone. Whether those students received any counseling or support afterwards was not mentioned.

Although research has shown that the mere presence of a police officer in a school increases a student’s chances of being referred to law enforcement, The Hechinger Report writes, King said that officers given the right training and support can act as positive mentors and play an important role in school communities.