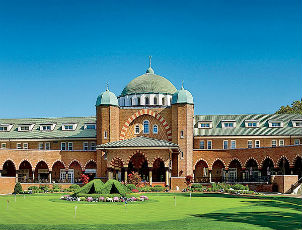 Pols rarely like what they see in the newspaper, but Illinois Governor Pat Quinn was so excited about the the 39th Ryder Cup taking place in his state, he took to Twitter and posted the following: “Thrilled to welcome the #RyderCup to IL. Will have a huge positive economic impact.â€ He then linked to a story done about the topic in the Chicago Sun-Times.

It’s no wonder Quinn’s so self-congratulatory these days. Some 40,000 spectators are expected to show up to Medinah Country Club in Medinah, Ill. each day from Sept. 28-30 for the tournament. The event, which pits a top team of golfers from both the U.S. and Europe and will draw hundreds of millions of viewers from around the world, is expected to be a major boon for the local tourism industry in DuPage County and in Chicago.

But while the Chicagoland area boasts a robust concentration of black-owned businesses, many insiders say they’re skeptical about the Ryder Cup’s ability to affect black-owned small businesses in the area in any significant way. Analysts agree the event could have an estimated economic impact of around $130 million — which doesn’t even take into account on-course expenditures — but few this week seem confident black businesses were going to benefit.

The PGA of America took notice of the problem in 2008. It tapped the Lexington, Kentucky based National Diversity Solutions, LLC to facilitate its Golf Industry Supplier Diversity Initiative, which identifies businesses owned by women and minorities which are able to deliver at tournament time. NDS and the PGA will hold a forum Wednesday at Medinah releasing the names of the businesses owned by women and minorities that have been chosen to work at the Ryder Cup and other PGA events throughout the year, said NDS spokeswoman Rochelle Owsley.

Ms. Skip Strittmatter, executive director of the DuPage Convention & Visitors Bureau, says she doesn’t believe businesses not cherry picked by NDS would face an uphill battle this week. “I don’t think there’s going to be any difference,â€ for minority-owned businesses, Ms. Strittmatter said. “We promote all businesses, and I can’t imagine that there wouldn’t be some windfall for this many additional people visiting our area.â€

Many beg to differ. Mell Monroe, owner of Welcome Inn Manor Bed and Breakfast in the near South Side says that while business has been steady of late, there was little to no indication his guests were staying to attend the tournament. Monroe, 58, said specific logistics and the stigma attached to the communities where most black-owned businesses in the Chicago-area are located would prevent most of them from getting a piece of the pie.

All told, golf in Illinois is a $2.1 billion industry according to the PGA of America, with 50,000 jobs in 2007. With a population of close to 1 million people, just over five percent are African-American. DuPage is home to the McDonald’s Corp., Navistar International and OfficeMax. But according to numbers released in a 2007 census report, just 2.3 percent of business operations in DuPage were black-owned. Nearly one in ten businesses in Illinois are owned and operated by blacks, the report said.

“Black folks aren’t getting any of that,” Monroe said of the estimated $130 million expected to infuse the local economy. “I’m guessing the people coming would be in their early 40s, up to people going into their retirement, mostly white males and they’re not coming as couples. I don’t think they would really do bed and breakfasts.”

Monroe adds that the media’s portrayal of Chicago’s “activeâ€ summer of violence didn’t help. Why, he suggests, does one city’s turbulent summer get publicized and framed in a certain manner, while others do not? “That’s a problem for all of us, and none of that helps Chicago,â€ he says. “If somebody gets shot there, I take the hit, too. All of it affects us.”

“[Unless] you have your business in a white area, forget [about profitability]. I don’t care how close you are.â€

Taritha Jackson, sales manager of the Chicago South Loop Hotel, which is black-owned and located at 26th and State Street in the South Loop (about a five-minute ride to the downtown area), says that she did not see an uptick in occupancy for the dates of the tournament. While still new to the market, most of the hotel’s business comes from conventions and private groups seeking to block out a group of rooms, though, as far as the tournament was concerned, it could still be early; several media reports this week said that hotel room nights in downtown Chicago were at or near capacity. According to Strittmatter, DuPage had filled about 16,000 room nights and hotels are 75 to 100 percent full.

“We’re not even on the radar screen when these type of big events and potential for big contracts come along,â€ says Maggie Anderson, author of Our Black Year, which chronicles her family’s initiative to purchase all of their goods, needs and services from black-owned businesses. “We’re not on that radar screen because no one sees us as a business force. There’s no way the Ryder Cup should be able to come come to our city and not consult our black chambers and business leaders, but the truth is we lack the infrastructure, so that’s why many of us don’t have a seat at the table when these opportunities come around.â€

Anderson says that while the slight should be considered a “slap in the face,â€ part of the responsibility falls on African-Americans to ensure that the next community that hosts an event as big as the Ryder Cup isn’t shut out of the opportunity.

“We have to generate that respect by supporting our businesses and lifting them up. People making food, producing t-shirts, involved in the logistics. We have to do our part; they’re not going to wake up one day and say, we’ve got to do right by the communities that keep us in business. They need to know that they need to engage us — and not just as consumers.”