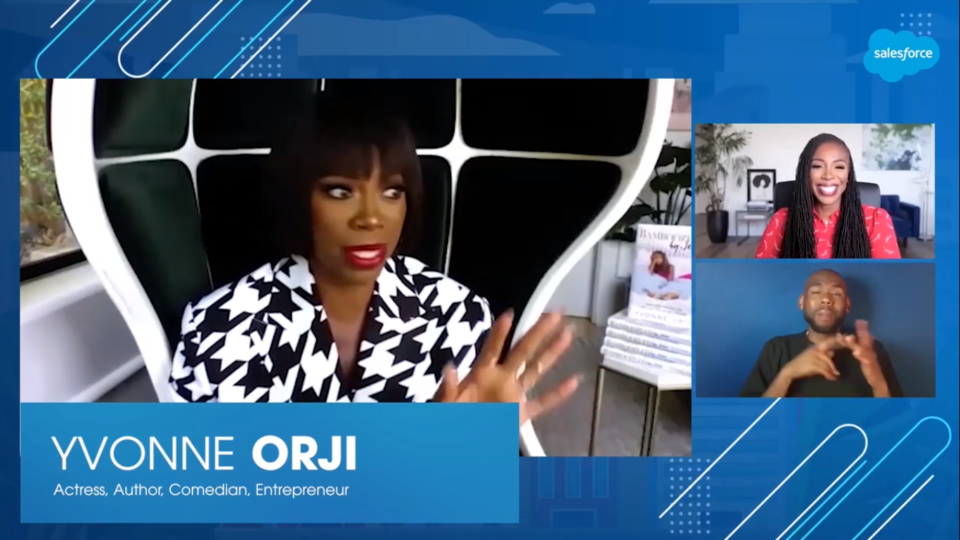 Hosted by Salesforce and sponsored by Black Enterprise and Deloitte Digital, the National Black Business Month Block Party featured discussions with comedian Yvonne Orji, former NBA All-Star Baron Davis, and others about taking their careers into their hands.

The Block Party also featured panel discussions and interviews on technology and building your brand. Orji, who stars on HBO’s Insecure, talked with the CEO of Salesforce Foundation and Chief Philanthropy Officer Ebony Beckwith and discussed taking control of her career.

Orji told Beckwith about her new book Bamboozled By Jesus: How God Tricked Me Into the Life of My Dreams and how she spent her youth preparing to become a doctor. She said in 2006, God told her to pursue comedy, but she was apprehensive about it because she didn’t think her parents would approve.

“It was at that moment where I did take my life into my hands to a certain degree and said, ‘alright, I knew that being a doctor wasn’t it for me,’ and I didn’t know what the alternative was, and it scared the crap out of me, but I’d rather do scared than not do it at all and not know what I could’ve been.”

Orji and Beckwith also discussed how to stay motivated through the ups and downs of a career, how women can own their own journey, start from the bottom, and work their way up. As a comedienne, Orji knows what it’s like to climb your way up the ladder to success.

“The way up is sometimes down, and in this popcorn generation, everybody wants to be a boss, but nobody wants to be a PA,” Orji said. “I believe boss status is available for everybody, but at some point, every boss was an employee. So the paying of dues has kinda been a thing that people don’t want to do anymore. There might be some sweat equity required, but that doesn’t mean you’re doing it wrong. It means you’re doing what you need to do to get to where you want to be.”

Robinson partnered with Salesforce and rap artist Sean “Diddy” Combs to create Shop Circulate, a digital marketplace promoting Black-owned businesses. During the interview, Robinson, an HBCU graduate, discussed her process and how to attract the interest of consumers.

“I don’t know if anyone has it figured out completely,” Robinson said. “Most of us don’t have a process; the process is winging it. No matter how far we get in our entrepreneurial journey, we have a lot of things that rest on our gut, and I think a lot of the successful entrepreneurs you see out there just have really good guts, and they trust their gut.”

Davis, who played more than a decade in the NBA, said Black Americans have an incredible opportunity to carve out their own space and thrive due to technology and social media. The former Golden State Warrior also discussed what pushed him into taking control of his own career.

“If we can carve ourselves some space out in America and go sit in a corner with our money, our resources, our brands, and our intelligence, we have an incredible opportunity to start to look at what does the greater world look like and how do we start to activate it,” Davis said. “So what triggered it for me is I became my own agent. I kinda stepped out on a limb and became an outsider-insider. If you look at the NBA now, you see these guys going into tech and investing.”

The Black Business Month Block Party hosted other interviews and discussions with award-winning podcaster Gia Peppers, Dr. Kari Williams, Karen Civil, and others. The interviews will be posted on Black Enterprise, so stay tuned.