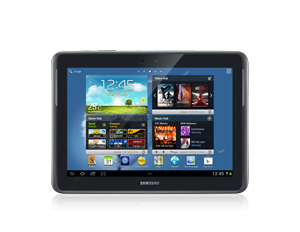 Android tablets for the business crowd doesn’t seem like the norm, especially with the advent of Windows 8 and the hybrid laptop/tablets coming in October, but consumers and the BYOD (bring your own device) business crowd can appreciate Samsung’s latest device.

The new Galaxy Note 10.1 is no exception. This tablet, which retails for $499 (16GB) and $549 (32GB), is Samsung Approved For Enterprise (SAFE), a suite of business-ready features that makes the Note just as desirable to IT managers as it is to regular consumers. It supports over 300 IT policies and mobile device management for scalable security. In addition, it boasts full Microsoft Exchange ActiveSync support, strong encryption and advanced VPN access.

Plus, the Note comes pre-loaded with one of the better Android office suites, a precise stylus, and easy connection and sharing features.

The Galaxy Note doesn’t have the same polish and shine as the iPad, but it does best Apple’s tablet in size and weight, coming in a hair thinner and lighter thanks to an all-plastic enclosure. However, the Note has many features the iPad lacks, including a microSD card slot (supporting cards up to 64GB), an infrared blaster, and a stylus pen.

The 10.1-inch display offers bright colors, which makes it ideal for intimate presentations. Since the speakers are mounted on the front, the volume is relatively loud at 100% and the audio quality is decent for a device of this size.

When you need or want to move the presentation to a bigger screen, the Note’s AllShare Play function allows for wireless HD connection to Smart TVs and other devices compatible with the DLNA wireless sharing protocol. The Note also has Wi-Fi, Wi-Fi Direct, and Bluetooth 4.0 connectivity.

A port on the bottom of the tablet houses the S-Pen, a pointing device that will feel familiar to anyone who used a Windows convertible laptop/tablet in the past decade. Unlike the capacitive styluses that work with any tablet–and mimic the press of a finger, the S-Pen communicates directly with the Galaxy Note via radio waves. This means more precision when using the pen and better palm rejection. Several apps built to work with the S-Pen come pre-loaded on the Note and more are available via Samsung Apps.

The company’s home grown note-taking app, S-Note, will accept pen input for drawing/scribbling or keyboard-based text. Plus, it will translate even messy handwriting to text. This feature isn’t as elegant as it could be, but it’s there if you need it. S-Note can also record audio as you write, or type, then export the notes to other apps or to a PDF file.

The Polaris Office Suite and Adobe Photoshop Touch, both of which are compatible with the S-Pen, come included.

The S-Pen is just one of the Galaxy Note’s nods to productivity. Another is the multi-screen function, which allows users to place app windows side by side, similar to Microsoft Windows. Unfortunately, this only works with select apps (Browser, S-Note, Polaris Office, Gallery, Email) for now.

Since the Note has a very robust quad-core processor and 2GB of RAM, the performance for most tasks is speedy and smooth. In multiscreen mode, I experienced some lag. Also, home screens with a multitude of widgets that rely on data from the web don’t slide into place as smoothly as they should. Overall, the tablet’s performance is impressive, but Samsung still needs to do some tweaks to make the experience smoother.

Bottom Line: The Galaxy Note 10.1 has a lot to offer business users. If you prefer an Android tablet experience, you’ll get a good one here thanks to the S-Pen. (Though the performance issues are worth considering.)