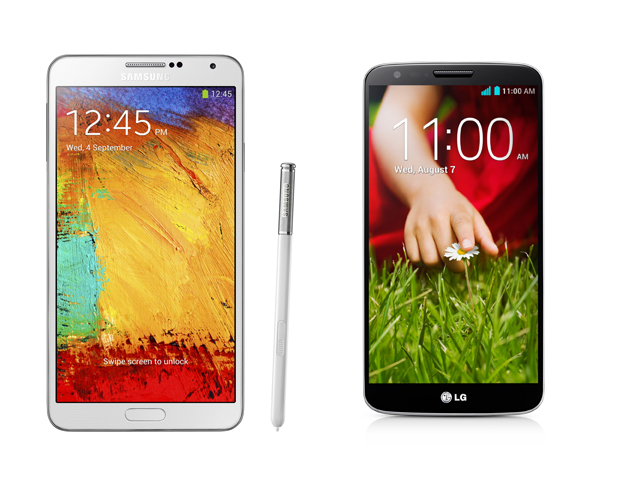 Samsung Galaxy Note 3 vs. LG G2: See which big smartphone is the best pick for you (Image: Sources)

The battle of the big smartphones will be in full force this fall as manufacturers like Samsung and LG try to give users reasons to leave their laptops and tablets at home.

The Galaxy Note 3 fits into a gray space between big smartphones and little tablets and comes with the S-Pen, a unique stylus designed to work with special sensors linked to the Galaxy Note 3’s 1,080-by-1,920-pixel display.

At 5.95 by 3.1 inches, the Note 3 is practically the same footprint as the older Note II, which has a smaller 5.5-inch screen, but at 0.33 inches thick, the Note 3 is noticeably slimmer. At 5.9 ounces, the Note 3 is lighter than the 6.4-ounce Note II and has a textured, leather-like back which makes it easy to grip.

Clicking on a tiny button on the S-Pen as it hovers over the Note 3’s screen brings up a small menu that offers quick access to special functions. A Pen Window feature lets users draw a box of any size and run app like the calculator or YouTube inside the box. A Scrapbook app lets users quickly save Web pages and manage collections.

The Galaxy Note 3 runs Android version 4.3, has a powerful quad-core 2.4 GHz processor and has numerous sensors, including a gyroscope, temperature and humidity sensors and a barometer. It’s also the only smartphone that pairs with Samsung’s new Galaxy Gear smartwatch.

Like its short name seems to imply, the LG G2 is brief and to the point, allowing users to get to functions with the fewest possible taps and swipes. For example, if the phone is asleep two taps on the display turns it on.

The front and sides of the LG G2 are free of buttons–the only switch is a multifunction rocker button on the back aptly called the RearKey. A long press on the volume-up or volume-down button turns on the 13-megapixel camera or the QuickMemo note-taking app. The position of the RearKey takes some getting used to, especially for those used to side-mounted volume buttons.

The LG G2 can be put into Guest Mode so a user can hand it to someone else without giving the person access to personal data. An Answer Me mode lets users answer a call by just grabbing the G2–even with a gloved hand.

The unit’s full HD IPS display is bright and indeed impressive. It has the same 1,080-by-1,920-pixel resolution as the Galaxy Note 3, but since it’s smaller, it has a higher pixel density thus making it much sharper.

To be fair, the LG G2 is actually positioned to compete against phones like the Samsung Galaxy S4, which has a 5-inch display. The 5.5-by-2.8-by-0.35-inch LG G2 is about the same size as the Galaxy S4, but due to its more efficient use of real estate, it squeezes its 5.2-inch screen into essentially the same body. The LG G2 has a muscular 2.26 GHz quad-core processor as well as high-end audio circuitry.

The choice between the Samsung Galaxy Note 3 and the LG G2 comes down to whether you want an everything-in-one-package smartphone tall enough to stick out of a shirt pocket, or a slightly smaller package that puts ease of use first. Neither unit will disappoint.