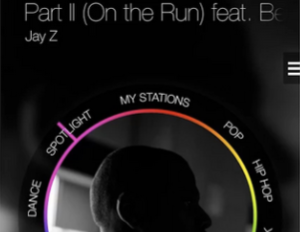 Samsung's Milk Music is powered by Slacker Radio, an established player in the music streaming space.

Another entrant to the music streaming battle has arrived, and this time it’s Samsung. It launched Milk Music today in the Android store, exclusively for its devices.

Samsung says Milk Music is “a free radio service, with no ads,” although at the bottom clarifies the ad-free statement is “for a limited time.” The smarpthone company goes on to clarify that the music service is powered by Slacker, another music streaming service that has access to millions of tracks.

You can change the station and what you’re listening to by turning the dial interface that lists various genres including Hip-Hop, Pop, and “Chill.”

Milk Music has over 200 stations based on different genres, and lets you personalize the music you get based on what you want to hear, what you like, and what you haven’t heard yet.

Milk Music requires a Samsung account, which is paired with your Samsung devices, naturally. While there are no plans to bring this to other Android or iOS devices, the likelihood of that happening is slim. Samsung’s software-based features often remain on the company’s devices exclusively.

The streaming radio is a direct threat to companies like Apple and Pandora who offer ad-supported and ad-free streaming radio services. A la carte streaming services like Dr. Dre’s Beats Music and Spotify do cater to a different market, but could still be affected by Samsung’s entry into the streaming space.

You can check out Samsung’s promo video below, and try the app on your Samsung smartphone or tablet by visiting the Google Play Store.

Google Chairman ‘Pretty Sure’ Your Data is Safe