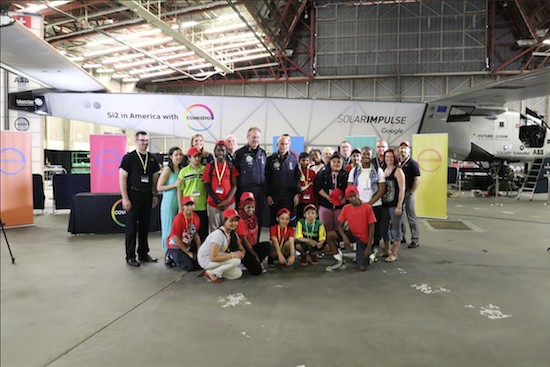 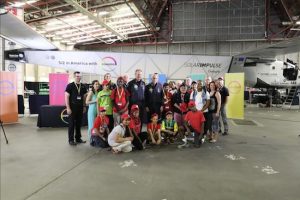 This month, more than 300 New York City elementary, middle, and high school students saw a plane that can fly day and night without fuel.

The youngsters joined Covestro and Swiss Consulate representatives at JFK International Airport to cheer the history-making Solar Impulse Airplane (Si2) and the clean-tech pioneers that conceived it. The plane flew into New York on Saturday, marking the final U.S. stop in the first solar-powered flight around the world.

Dubbed Science Day at JFK, the event was co-hosted by Covestro as part of its i3 (ignite, imagine, innovate) STEM initiative and the Swiss Consulate, in collaboration with the United Nations Environment Programme and the New York City Department of Education.

The students engaged in an interactive discussion with the pilots, explored the plane up close, and learned more about the high-tech materials used on board from ground crew members like Paige Kassalen. Kassalen, the first and only American female engineer on the team, is a 23-year-old electrical engineer with Covestro. She has been part of the Solar Impulse journey since the plane left Hawaii on April 21 for Moffett Airfield in California.

Students from Ditmas IS who are also sustainability leaders in their school, also participated in hands-on science day demonstrations led by Covestro i3 STEM volunteers.

Covestro, a leading polymer materials supplier, has been a Solar Impulse partner since 2010. Its advanced technologies played a large role in transforming Solar Impulse from a vision to a reality, helping to create a lightweight and energy-efficient plane that can fly day and night without fuel.

“The achievement of Si2 highlights the enormous promise of clean technologies that we hope will unleash the potential of today’s students as the clean-tech pioneers of tomorrow,â€ said Richard Northcote, Chief Sustainability Officer, Covestro, in a statement. “Solar Impulse embodies Covestro’s commitment to sustainability and advancing STEM education. ‘Science Day at JFK’ was an opportunity to bring it all together in a fun and exciting way, with the hope of inspiring a cleaner, brighter future.â€