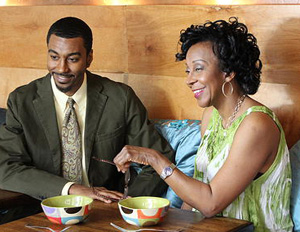 Working alongside family and those you love can sometimes call for difficult decision making, compromising disagreements and a host of personal spill over, unless you’re Â mother and son duo Brenda and Aaron Beener, who worked side by side each day to raise over $20,000 in capital to fund their growing vegan eatery.

Seasoned Vegan is owned and operated by Brenda Beener and her son and business partner Aaron Beener. Located in Harlem, the green neighborhood hot spot, serves all the soul food inspired dishes you love, “veganized.â€ Their menu carries cultural favorites from mac and cheese, to lemon crusted chicken, burgers, poboys (in honor of Beener’s parents) and so much more—all meatless and completely vegan.

The two first got started in the restaurant industry in 2012, but Brenda says even before then cooking was always a special part of her life. She perfected the craft while preparing vegan dishes at home after she and her husband decided their family would no longer eat meat.

“At this point, I had to create meals that my husband would eat as well as food that was tasty for my children, and Seasoned Vegan was born,” she says.

Family and friends enjoyed the meals so much so, that Brenda began to sell them at the local eatery but never did she imagine that her small corner of the room would turn into her own restaurant, where her vegan meals could flourish.

[Related: 5 Tips to Better Prepare Your Family for Business]

It was her son, Aaron, who encouraged her to follow through with a Kickstarter campaign to raise the restaurant’s capital. During the last hour of the campaign, they not only met but exceeded their goal, raising $22,000.

Though an additional $5,000 won in a contest with the Harlem Business Alliance, an investment from her husband and a host of other “blessings,â€ the self-taught chef says they were able to open the doors of Seasoned Vegan, and she gives much of the credit to her dedicated son, who initially had no intentions of being part of the business but in the long run, refused to give up on his mother’s dream.

“He’s my foundation. He really keeps me grounded,â€ Brenda says. “I waiver in my thoughts and sometimes when things don’t go right, I start to doubt and my son has been the one to say, ‘You know Ma, it’s going to work.’ Working with my son has been a true pleasure because [he] is focused. I couldn’t have done this business without him.â€

May 3 marked one year the two have been in business together and Brenda says thisÂ is a true milestone that hopefully means she will be in business for many years and generations to come.