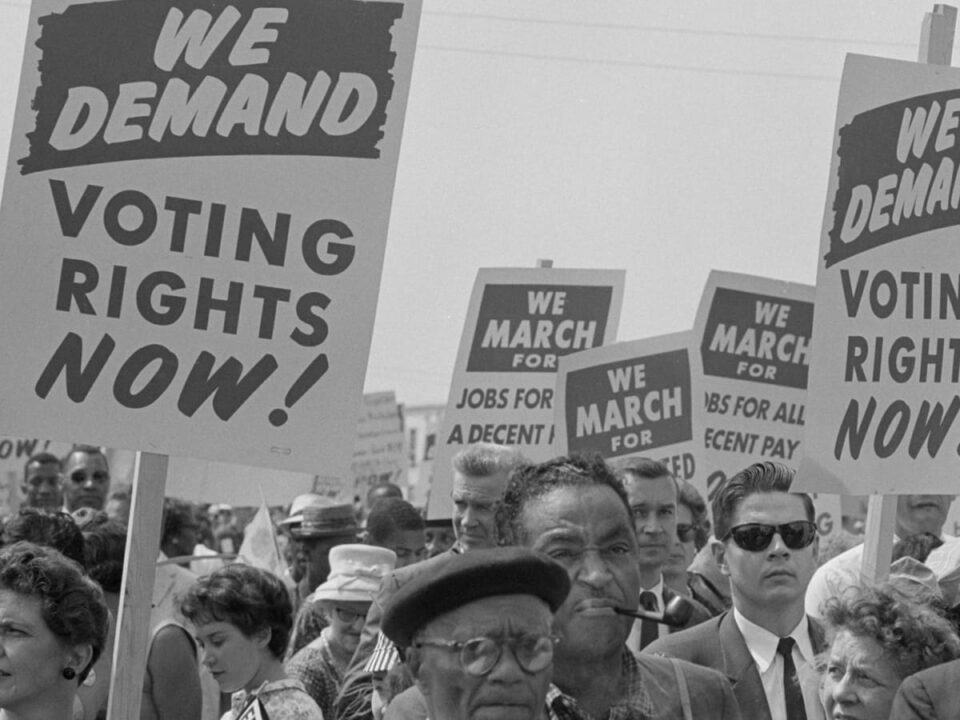 Citizens Protest for voting rights in the 1960s. Today marks the 56th anniversary of the voting right act. Image: Twitter/@RepValDemings

Black Enterprise Magazine, the #1 Black digital media brand, will host the second installment of its Economic Equity & Racial Justice Town Hall Series which will focus on voting rights and suppression.

The town hall will take place virtually on Wednesday, August 11, from 7 p.m. to 8:30 p.m. EST and will be hosted by Black Enterprise CEO Earl “Butch” Graves.

Graves, who was raised during the civil rights movement, knows how important the fight for voting rights is, especially today.

“We cannot afford to remain silent when it comes to any action that seeks to deny us our fundamental rights, diminish our dignity or hinder our economic progress,” Graves said. “There is perhaps no fundamental right more critical to Black people’s fight for opportunity, equality and equity in America than the right to vote.”

The group will discuss the voting restriction bills Republican-led states and the party itself are passing in the wake of former President Donald Trump’s election loss, what Black business leaders and CEOs are doing to fight back and President Joe Biden’s role in the effort to expand voting rights.

The town hall comes a week after the 56th anniversary of President Lyndon B. Johnson signing the Voting Rights Act of 1965 into law. The act is more important than ever as lawmakers try to set Black Americans back.

The Voting Rights Act to protect and enforce the 14th and 15th Amendments of the Constitution and was enacted in response to voter suppression in the 1960s by state governments and local law enforcement agencies who attacked, beat and even killed Black Americans who attempted to organize and vote.

The law was prompted by several actions and events by civil rights leaders including the 1965 March from  Selma to Montgomery, known as Bloody Sunday, in which more than 600 non-violent protestors were attacked by state troopers.

After Bloody Sunday, President Johnson told Congress in a speech “There is no constitutional issue here. The command of the Constitution is plain. There is no moral issue. It is wrong, deadly wrong, to deny any of your fellow Americans the right to vote in this country.”

Johnson’s words hold weight to this day as the Republican Party has waged a full-scale assault against the voting rights of minorities, specifically Black Americans amid former President Donald Trump’s false election claims and lawsuits.

Multiple Republican-led states have passed bills restricting mail-in ballots, drop boxes, absentee voting and even getting food and drinks while waiting in line to vote. This year alone, more than 43 state legislatures and 17 states have passed restrictive voting laws.

Civil rights groups and figures have been pressuring President Joe Biden, who was carried to the White House on the backs of Black voters last fall, to address the issue, but so far he has done little more than hold speeches shaming Republicans and meetings with civil right leaders.