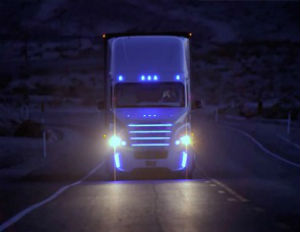 Nevada has become the first state to license a self-driving semitruck to operate on its highways.

[Related: Affordable Care Act’s 5th Anniversary: Where Are We Now?]

According to Engadget, Daimler’s Freightliner Inspiration Truck has been approved for road travel in the Western state thanks to a “Highway Pilot” system, which comes equipped with cameras, radars, computer hardware and other sensors. No word on whether or not the big rig would be able to travel to neighboring states without someone manning the wheel full-time.

According to Forbes, the truck is considered a level 3 autonomous vehicle, which means hands-off highway driving only applies under certain circumstances, and that a driver is still required to be present and alert enough to take over in an emergency. The driver also has to handle other tasks the vehicle isn’t equipped to handle, such as passing other vehicles–something it absolutely won’t do in favor of keeping safe braking distances and traveling the speed limit–as well as exiting a highway, driving local roads and pulling up to a loading dock in order to make or take deliveries.

Forbes also notes that a level 4 vehicle would have these capabilities, as well as be designed to monitor roadway conditions for the entirety of a trip regardless of whether or not a vehicle was occupied.

An AFP video shows the truck cruising on a Nevada highway, though the pace is probably slower than most cars and even most truckers would drive.

Google has been working on developing a self-driving car and nearly three years ago, California approved the use of such vehicles on its own roads. This seems to be the first time such a large vehicle has been approved to operate autonomously, albeit with a driver present.

It could mean that big changes will be on the way for the trucking industry, in which drivers are often paid by how quickly they make deliveries and sometimes drive to the point of exhaustion to meet deadlines. A report from the U.S. Department of Transportation’s National Highway Traffic Safety Administration found an increase of the number of deaths and injuries in big truck-related accidents between 2011 and 2012: up from 3,781 to 3,921 and 88,000 to 104,000, respectively.