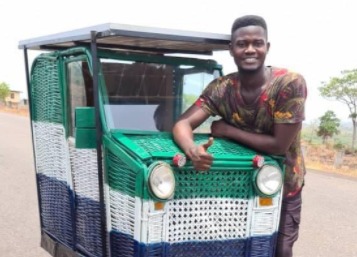 Imagine building a running car made from scraps and trash. That is what Emmanuel Alie Mansaray—a college student from Sierra Leone—did. Further Africa reported that the university student came up with the idea of building a solar-powered car made from trash and scraps he picked up over time. Further Africa also reported that the project took Mansaray three years to complete, but he now regularly drives the car around town.

Further Africa also stated that pollution is a growing problem in Sierra Leone.

“Now, more than ever, there is a need for renewable transport to ensure cleaner air for its inhabitants. It has been rated as the 17th most vulnerable country in the world, when it comes to air pollution,” Further Africa also said.

It was mentioned that Mansaray wants affordable, green energy to be accessible to everyone. The creative thinker who is interested in renewable energy is on a path to think out of the box while integrating clean energy. However, the journey to make a difference has not been easy for Mansaray.

Salone Messenger said that the self-taught engineer and inventor of “The Imagination Solar Car” could not get much support for his idea. In response, he saved money his family had given him for lunch to buy parts for the project, according to Salone Messenger.

Mansaray’s determined spirit was evident in a Facebook post that he shared on his page back in April. The inventor stated that people who saw him moving trash thought he was crazy. However, he kept moving forward to complete his innovative project.

“But I never give up on my dreams and vision, because of the negative thought of people,” Mansaray said. “There are lots of Emmanuel out there that needs your support to make their dreams become successful.”

You may learn more about Mansaray’s goals to start an energy project by visiting his GoFundMe page. It is located here.