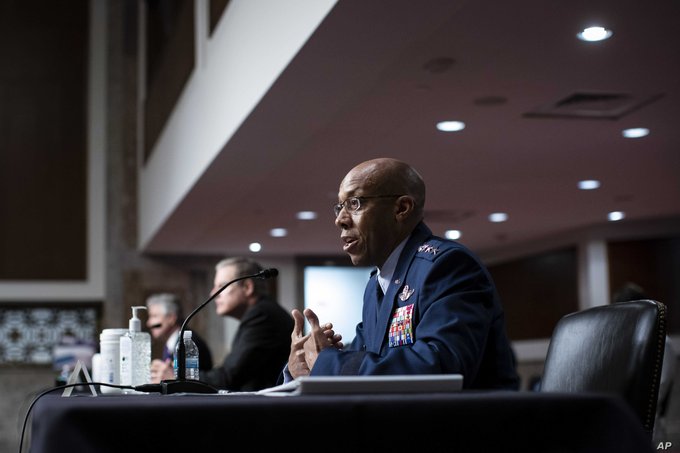 According to The New York Times, Brown was approved by a vote of 98 to 0. President Trump celebrated the moment on Twitter and Vice President Mike Pence made a rare appearance on the Senate floor for the vote.

The appointment came a week after Brown released a video on YouTube speaking in starkly personal terms about his experience as a black man in America, his unequal treatment in the armed forces, and the protests that have shined a light on America’s racist history and present.

“I’m thinking about how full I am with emotion not just for George Floyd, but the many African Americans that have suffered the same fate as George Floyd,” Brown said in the video, an unusually public statement for a high-ranking military leader.

“I’m thinking about protests in my country ’tis of thee, sweet land of liberty, the equality expressed in our Declaration of Independence and the Constitution that I have sworn my adult life to support and defend. I’m thinking about a history of racial issues and my own experiences that didn’t always sing of liberty and equality.”

Brown graduated from the R.O.T.C. program at Texas Tech University and served as a command pilot with more than 2,900 flying hours, including 130 combat hours.

Trump wasted little time throwing himself into the situation, tweeting to announce Brown was appointed before the vote took place. Trump also praised the Senate for approving “my decision” to name Brown.

Brown was formerly the commander of the Pacific Air Forces, responsible for 46,000 airmen and operations spread over half the globe, including Japan, Korea, Hawaii, Alaska, and Guam.