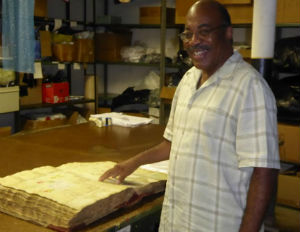 If you’re in the fashion or costume industry, you may just wear yourself out trying to find a sequin manufacturer in the country outside of North Bergen, New Jersey.

According to Raymond Hill, his firm, Sequin City, is the only manufacturer left standing in the space.

“We are the only sequin manufacturing company in the United States. Just one. Just us. When I started there were five. We provide the fashion industry, the shoe trade, the accessory trade, costume trade. I’m not allowed to name our customers but I can tell you that we supply fabric and sequins to some of the major and biggest theme parks around the world.”

Hill’s manufacturing business is a true African-American success story. Originally from South Carolina, Hill like many other Southerners migrated north in search of opportunity.

“There’s a picture on my wall of people picking cotton and that’s because that’s what I did as a child. We picked cotton for two cents a pound. There’s also a picture of a plow which belonged to my grandfather. My grandfather was a sharecropper. I often say sharecropping is half a step from slavery because you are perpetually in debt. In most cases they couldn’t read or write so the books were kept by the landowner and at the end of the season you were given just enough to start all over again.”

Hill says growing up dirt poor has given him a certain perspective on life He says he doesn’t get fazed by the little things.

Hill has been in the fabric and sequins business for more than 30 years. He started out in the fabric business with a Fortune 500 company, working his way up from the sample department to become the first black sales manager. Working in the international sales department, his quest for unique, choice fabric has led him to at least 56 countries.

“I was employed with other companies in the sequin business and developed a feel for it. And so my notion was if I could make money for them I could make money for myself and so after being unceremoniously fired I decided to start my own business and 10 years later I’m sitting at the same desk that I was sitting at when I was fired. Only this time I own the business.”

Hill used to work in the company as a sales manager/vice president. He says he had an arrangement with the owner for a percentage if the firm did any sales more than a million dollars.

“Within a year and a half we had reached two and a half million in sales. Each month he would write out those big commission checks and he became angrier and angrier. One day he just walked in and fired me. At the time I thought it was the absolute worst. I had a 2-year-old son and I had just gotten out of hospital. In hindsight it was the best thing that happened because it forced me to do what I had been thinking about all along and that was start my own business.”