Serayah McNeill Dishes on Empire, Not Having 'Assets' and More 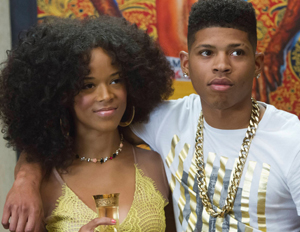 Do you draw on any pop stars to inspire your character Tiana?

Well, the inspiration that some of the writers and I sat down and thought of for Tiana was BeyoncÃ© and Rihanna. Not being Rihanna or being BeyoncÃ©, but just the power they possess in their performances.

In working so closely with Taraji, what have you been able to learn from her?

Oh, she’s fearless! She’s just really fearless. She has complete okay and complete devotion into what she does. When I see her doing her thing behind the scenes, when she makes a decision, she sticks to it and she goes through with it and it becomes what everyone loves. And that’s what I admire about her. It doesn’t seem like she second guesses what decision she makes. She’s made up so many adlibs for the show that weren’t even written, and those are the ones that are trending on Twitter. She did that in the moment. Terrance does that as well.

Who else would you give everything to work with?

As far as acting, Denzel Washington, Halle Berry; she’s like my idol. J. Lo, I think she’s a really good actress. There’s something so authentic about her. Music—Chris Brown, something with Brandy. That would be really cool, that would be so cool! Like a girl type song. I study her like a book.

Very wise choices! We’re sure there have been so many highlights, but what is the best part about landing this role?

I think it is the fact that I get to be an artist because I really am a singer and I do want to be a performer. What better role for my first thing coming out than being a singer? And being one that’s really popular in the world of Empire. I think it’s just like a win-win for me.

What kind of music will Serayah the artist make?
It’s similar to Tiana’s in ways. I’m not as pop, but more R&B elements.

Have you given any thought to your own empire? What other things do you want to branch into now that you have a major platform?

For now my own projects and writing music. I know I want to do so many things, but I want to make sure they all make sense. I do want to have clothing and real-estate, just different things. Write now I’m planning that out and writing those steps down. I built my base… and so we’ll see where it goes from there.

Before wrapping up, we’re in such a social media and digital age. Having access to that kind of imagery non-stop can really influence people, especially teens. What would you to say to teen girls who see images ofÂ society’s beauty standards and feel pressured to succumb to those ideals?

Looking at some of those people that you think are perfect beings because of the way the bodies are looking these days, that’s not natural. People aren’t going to have that naturally. I just say that you have to love you first. I think that if you do that first you’ll be alright. Me personally, I don’t have all those “assetsâ€ [Laughs], but definitely you just have to love what you got and want to be who you are for you.