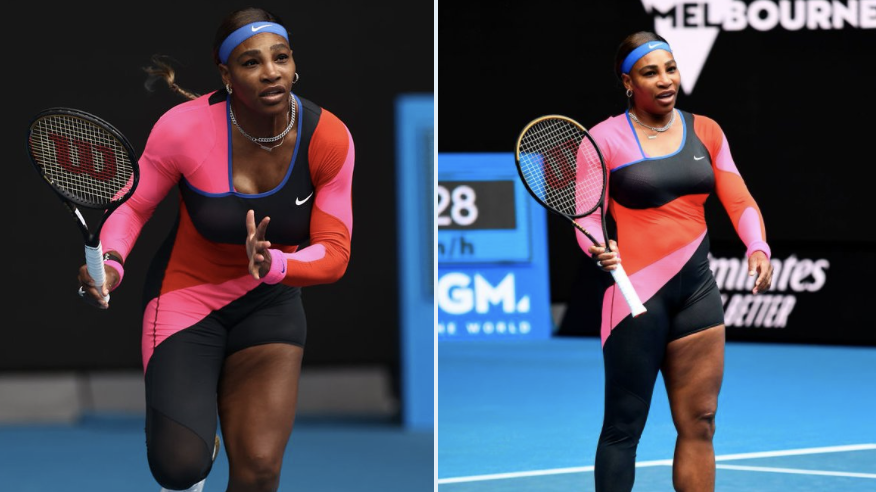 Tennis superstar Serena Williams wowed the crowd at the Australian Open on Monday with a head-turning one-legged catsuit.

The sexy outfit composed of bright pink, red, and black Lycra was a not-so-subtle nod to another stellar champion–Florence Griffith Joyner, also affectionately known as “Flo-Jo.”

“I was inspired by Flo-Jo, who was a wonderful track athlete, amazing athlete when I was growing up,” the 39-year-old athlete said as she rocked a T-shirt that read “Unstoppable Queen” in a post-match interview. “Well, watching her fashion, just always changing, her outfits were always amazing. This year we thought of what can we do to keep elevating the Serena Williams [look] on the court. The Nike team actually thought of this design of inspiration from Flo-Jo. I was like, ‘Oh, my God, this is so brilliant.’ She had such amazing style and iconic-ness.”

“This year we thought of what can we do to keep elevating the Serena Williams on the court.”

Williams, like her powerhouse predecessor, empowered Black women in sports by combining fashion and athleticism. Flo-Jo was not only an Olympic gold medalist but a talented hairstylist and nail technician who served looks at every track and field event in which she competed. According to Encyclopedia Brittanica, her world records in the famous Olympic sport still stand–almost 35 years later.

Flo-Jo turned heads at the 1988 Seoul Olympics with an impromptu design change to her tracksuit. When asked about her incredible swag, the iconic athlete explained that she “liked how it looked.”

Flo-Jo died suddenly in 1998 after an epileptic seizure. She was 38-years- old– one year younger than Williams is today.

Williams defeated her opponent Laura Siegemund, a German player ranked 49th, in a little under an hour in two sets ending 6-1 at the Australian Open.