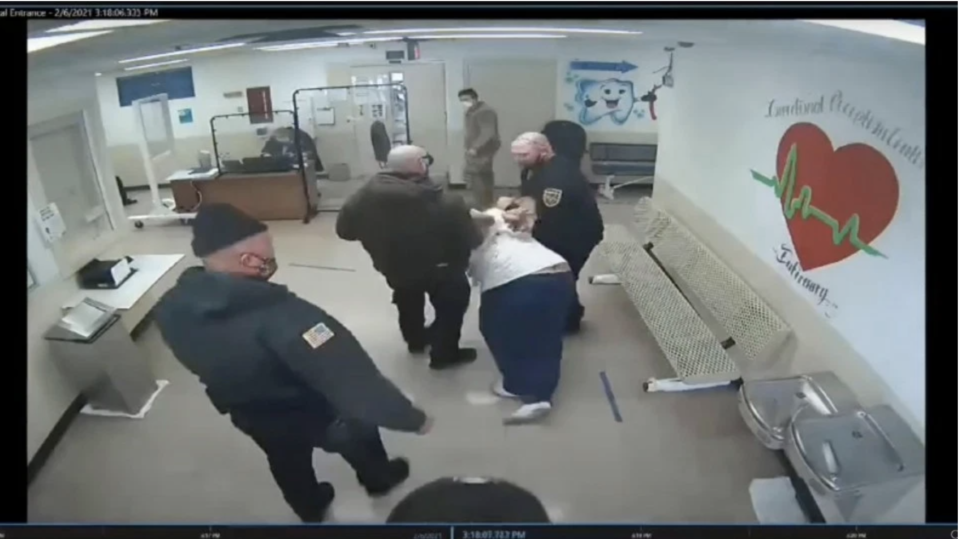 After allegedly using excessive force against inmate Michael McDaniel that resulted in his death, seven employees from the Ohio Department of Rehabilitation & Correction were fired.

According to ABC News, one nurse, five officers and a supervisor were given their walking papers after investigating McDaniel’s death while he was in police custody.

Surveillance footage captured the 55-year-old man being tackled by prison guards while collapsing no less than 16 times before he succumbed to his injuries on February 6. McDaniel was in the inmate reception area.

One of the officers involved, Heath Causey, reportedly took down McDaniel as he was being taken outside, “causing his body to veer off the walking path and land face-down in a snow-covered area.”

Although it was the dead of winter, he didn’t have on a coat or shoes.

The news outlet also reported that, per disciplinary records, Lieutenant Brown didn’t offer the inmate any assistance or medical treatment after he suffered abuse at the hands of prison guards.

The on-duty nurse barely assessed McDaniel, nor did she follow the standard procedure of checking the man’s vital stats. Another nurse, Jamie Dukes, deceptively signed a medical form that indicated McDaniel refused treatment. Dukes wasn’t present to confirm if that was true.

“We’re responsible for what happened in that video,” director Annette Chambers-Smith told reporters following the public release of the footage. “There is no question about that.”

The cause of death for McDaniel was determined to be from “stress-induced sudden cardiac death.” He also had injuries all over his body.

Prosecutors will decide if the seven trifling employees will face charges.