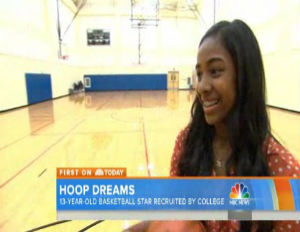 Last month, San Antonio Express-News reported that seventh-grader Deja Kelly from Luna Middle School in Texas gave a verbal commitment to play for the University of Texas at Austin, making her dream of one day being a Longhorn true.

The 13-year-old’s father, Darren Kelly, played for the Longhorns from 1999-2001 and it has been the basketball star’s greatest wish to follow in her father’s footsteps. As a 6-foot-4 senior guard, Deja’s father was named to the All-Big 12 third team after leading his team in assists and minutes played.

“It was really exciting, especially since I’m in seventh grade,â€ said Kelly, who also has interest from University of Texas at San Antonio, Houston and Grambling State. “It was my dream school, because my dad went there. I’ve been putting in the work.â€

While verbal commitments are nonbinding, the 5-foot-8 point guard’s latest step in trying to lock down a college home is a huge step ahead of her peers. She is only the second middle school student in the Texas area to commit to a D-1 school. In February of this year, eighth-grader Zadock Dinkelmann committed to play football for Louisiana State University.

Although a verbal commitment is strong proof that Kelly has made up her mind about college, the earliest she will be able to sign a national letter of intent and fully seal the deal will be November 2019.