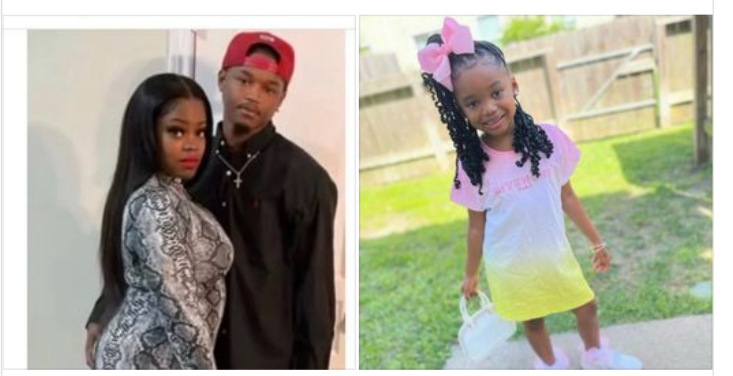 A quick thinking 10-year-old girl saved her own life by playing dead when a masked gunman opened fired and killed her pregnant mom, dad and little sister.

The tragic incident happened in Houston, Texas, Wednesday night when a shooter with a medical mask on, reportedly opened fire on Harmony Carhee, 6, Donyavia Lagway, 29 and Gregory Carhee, 35, in their apartment, according to KHOU.

The 10-year-old was reportedly wounded but she survived, “by playing dead, then called her grandmother for help after the shooting,” according to police. An 8-year-old boy who is also a member of the family, was not at home, during the horrific incident.

Ronette Terrell, who is Lagway’s relative, told the news station how the clever child survived, then took care of her little 1-year-old brother who the shooter reportedly grabbed by the hair and threw like a rag doll.

“She waited until he left and pretended that she was dead and then when he left she locked the door, grabbed her little brother, then called her grandmother,” Terrell told the outlet.

According to Click2Houston.com, police also stated that the surviving girl “FaceTimed her grandmother and other relatives around 10:30 p.m. saying she had been shot inside the apartment,” after playing dead.

The child was shot in the arm within the apartment complex which is located at 12101 Fondren Rd. According to reports, “Police believe they know who the shooter is,” although the person who knocked on the door has not been publicly identified.

“Right now, we don’t have all the details and right now we’re just looking for a suspect to see what happened,” Assistant Chief Patty Cantu with the Houston Police Department said.

Per ABC 13’s account of the tragic events, Cantu added that she hopes someone will contact police with details about the deadly shooting.

While HPD remains on the hunt for the shooter, and surveillance video is being reviewed by authorities, the shooter’s motive is unknown. Police do not believe that the deadly incident was result of a home invasion. A  $5,000 reward is being offered by Crime Stoppers, ABC 13 reported.