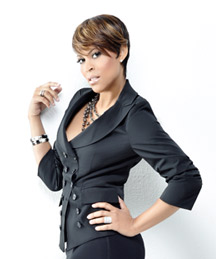 O'Neal creates her own reality & gets paid well for it

More than just the ex-wife of basketball great Shaquille O’Neal, Shaunie O’Neal is a media mogul making waves behind the scenes in the reality TV arena. The mother of five first captured America’s attention during an episode of MTV Cribs, when one of the show’s executive producers noticed her on-camera personality, leading her to become an entertainment correspondent for two nationally syndicated celeb-driven shows, The Insider and Access Hollywood.

Now, the newly divorced Los Angeles native is doing things on her own accord, staking her claim in the television production, publishing, fashion and, possibly, film business. She executive produces the widely-popular VH1 show, Basketball Wives, and its sister series, Football Wives, for Shed Media.

BlackEnterprise.com chatted with the young businesswoman about starting her own production company, Amirah, Inc., stepping in front of the camera on this season of Basketball Wives and why she knows what’s good for business and TV.

BlackEnterprise.com: How did you come up with the idea for Basketball Wives?

Shaunie O’Neal: I came up with the idea, maybe about four or fives years ago. We were moving from city to city–my kids, my family, everything.Â  [I] just kind of sat on it for a minute and then I started talking to different people that I knew [who] worked in the production industry.

Once I said something and put the idea out there, the ball just started rolling extremely fast. We shopped it to a few different networks. We had some wonderful feedback and actually more than just VH1 was interested, but we ended up going with VH1 just because they were ready to go now and they presented us with the best offer.

As a producer and cast member, how do you find a middle ground between the business side of things and your personal life with all the drama that comes with being on a show like Basketball Wives?

It is hard to keep that medium because people just expect so much.Â  [They] expect you to walk this super-narrow line all the time and I’m going to fall off that line sometime.Â  It’s only natural. I think we all do and I just find myself sometimes just trying to be a little more careful, but you have to live.Â  I don’t want to live walking this straight, narrow line all the time. I do want to just be me, have fun and say what I want to say when I want to say it sometimes, but I’m a smart girl and I handle my business. I’m a great mother and those times you see on TV that I snap on somebody that’s life.Â  It is what it is.

How has the show helped you as far as branding?

It helps my branding now that I’m actually out there and more visible, it has opened a lot more doors for me and for all the girls.Â  All of them have been reached out to more. I would say, depending on how you act, some more than others. I think, for my instance, I’m not the one on the show known for the drama and known to bring the drama and all that. Did I have a moment of drama?Â  Yeah, but I think we all do.

What sparked the creation of your production company Amirah, Inc.?

You also have plans for a shoe line. When can we expect that?

We are shooting for the end of 2011. I want hot, sexy shoes.Â  A shoe that you can wear to work or to that business meeting and then a shoe for you to go out at night with your girls. As I call it: a sexy after five type shoe. I’m looking for my shoe to be affordable so of course small boutiques and such, but I’m also looking at Macy’s and places like that.

What can we look forward to seeing from you in the future?

There’s several things on the table right now. Books, shoes, a few more shows, looking into movies… The sky’s the limit right now. I’m just having a ball at everything that I’m doing. And I look forward to each day and each challenge and at the same time I’m learning.