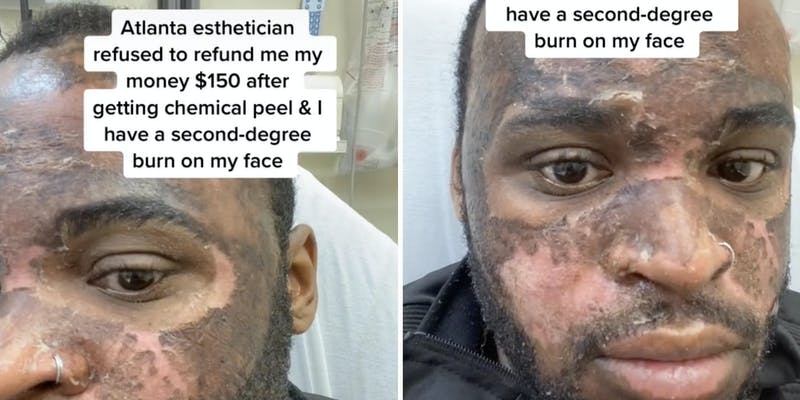 For this TikToker, a session with an Atlanta esthetician left him with a $150 chemical peel, second-degree burns, and no refund.

In disappointment, Neyo (@neyoprettyboyrealness) revealed the extent of his severe burns in a TikTok video which amassed 2.4 million views by Monday, The Daily Dot reported. The comments were first disabled; now it seems the video has been taken down entirely.

The TikToker claimed that the skincare professional did not give him a refund as she warned him about the possible damaging risks.

While the views racked up, Neyo decided to take his concerns to Instagram, where he received an abundance of support on his journey to healing.

“My life is over,” Neyo wrote in the caption of the Instagram post. “I don’t know what else to do.”

One user wrote, “I pray that things will get better for you my love. I’ll definitely send up a prayer for you.”

In another now-disabled Instagram video, Neyo opened up about his skin issues prior to getting the treatment. He says he was just a child when he received extensive skin grafts after suffering severe burns that left him near death.

The telling of his childhood experience concerned other Instagram users that he had not followed his esthetician’s advice following the chemical peel. Comments also suggested that the TikToker should have not undergone the chemical peel with his skin history.

“The skin grafts… could be the reason your skin reacted the way it did to the chemical peel,” one user wrote in the comments.

In response to his uneasiness, Shamari-Rene Cherry, founder of Diamond Facez Skincare Bar, who performed the chemical peel, posted a nearly 20-minute video to Instagram to defend her reputation.

In the video, Cherry explains that she does not offer chemical peels to first-time clients. She goes into the process, saying there is nothing glamorous about the peels, as it takes about 7 to 10 days to heal, sometimes longer. She accuses Neyo of picking at the skin before fully healing, which resulted in the painful results.

“My client basically didn’t trust the process. That’s the process of a chemical peel,” she said.

“It was triggering for him, and he overreacted.”

Shortly thereafter, Neyo followed up with posting screenshots of interactions between himself and Cherry, including her refusal to refund him for the service.

According to The Daily Dot, Cherry responded with posting a video from TikToker and fellow esthetician @picklevikk, who sides with her belief that Neyo didn’t wait for the skin to heal.

The ongoing dispute may have been the result of the disappearance of Neyo’s videos. However, his skin appears to be healing.

“My skin is clearing up,” he says in an Instagram video posted on Sunday, as per The Daily Dot. “The color is coming back.”