Sheryl Underwood's Tips for Success in Comedy and Business 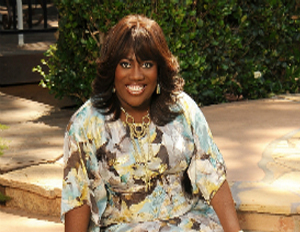 Become “one” with your audience. Sheryl abides by the principle: It is better to give than to receive. She looks for ways to use her talents for philanthropic endeavors. One particular area she is passionate about is education. Through her Pack Rat Foundation for Education HBCU Initiative, Sheryl is raising awareness and money to support the 105 Historically Black Colleges and Universities and students committed to pursuing a higher education. “There’s a whole generation on the rise and they are going to be our next leaders, politicians, and the like. … That’s why I’m passionate about [supporting] higher education, particularly HBCUs.â€

Sheryl also supports the efforts of the NPHC Greek letter organizations and partners with HBCU radio stations, providing Sheryl Underwood Radio at no cost to the stations. To support new talent, the Sheryl Underwood Radio app will provide a platform to break new music and showcase original radio theater. The app is also a home for her original and archived programs, which her fans love. Sheryl’s advice: Find an entity, group, or organization where your influence has the power to make a difference. It doesn’t have to be financial. Give your time, your expertise, and your support to communities and causes that have helped you get to where you are, or that exemplify positive initiatives and interests in general.

Respect and honor your team. When you’re around Sheryl, it’s clear that she not only values the asset of having a strong team by her side, but her team also reciprocates that view. Two fellow comedians, members of Sheryl’s team, reinforce the idea of how important it is to keep good company. Michael Washington, one of Sheryl’s longest team members, says his experience has been rare.”Sheryl is more committed to the team than money.”

Sheryl also invests in the future of comedy by mentoring her protÃ©gÃ©e, Kyle Erby. He has been her mentee for seven years. The one word he uses to describe her is “go.” Their time together taught him that, no matter what, he must continue to “go.” “Be better than you were the day beforeâ€ is the standard she sets for herself and the team,” says Erby. Never underestimate the need to build your team.

Sheryl, who was recently the subject of the TVOne bio-documentary series, “UNSUNG Hollywood: Sheryl Underwood,” can be seen daily on CBS’s Talk, which averages over three million viewers and, during Sheryl’s tenure, received its first of many Daytime Emmy nominations. Her radio show can be heard regularly on numerous HBCU Radio Stations, and she continues to be an in-demand entertainer who gives back.