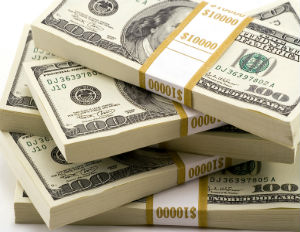 We humans are funny beings. Apparently, the sight of crumpled, wrinkled notes makes you want to spend in a way that new, crisp dollars (dollar bills y’all) simply do not.

Yes, a recent piece in Forbes lays out very clearly that we value the crispness of the dollar almost more than the dollar itself.

Is it that much of a surprise? I mean, our consumptive culture does covet that new smell – new cars, new money, new babies.

So, what is it? Apparently, there is a method to the madness. Not only are people more likely to spend worn money over fresh money, but people are more likely to gamble with money that looks like it’s been through some things, even if it’s a hundred-dollar bill. According to the study, it’s easier for people to spend one ragged $100 bill than to spend five stiff $20 bills. But, if you have five $20 crinkly bills and one crinkly $100 note, you’re far more likely to spend the smaller note.

It’s an interesting phenomenon — especially in the age of plastic. Stores are trying to adapt to the trend, and some are considering subliminally supplying their registers with cash that’s been around the way to encourage customers to spend.

Do you hang on to crisp bills and let go of used ones? Holler at me @KeishaJenkins about your cash habits.