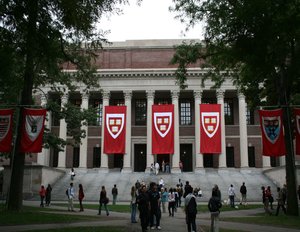 Although Harvard’s use of the term house master allegedly had no connection to slavery in the United States, it isn’t difficult to see how for some students of color, using the term would have been difficult, if not humiliating. The Ivy League school has decided to use faculty dean instead.

[Related: How I Did It: Evan Rose, Software Engineer]

Yes, the term is rooted in the European academic tradition, and I personally think it’s OK for Europeans to use it. In an episode of Downton Abbey, Mr. Barrows–an adult character on the show–addresses a 4-year-old child as “Master George.â€

But in the U.S., the term wasn’t simply a term of respect or a way to acknowledge status. It was a term used to subjugate and dehumanize human beings.

Some readers of the Boston Globe wrote in to decry and ridicule Harvard’s decision.

Every master plumber, master carpenter or master electrician in the State should hang their head in shame.

And don’t get me started on those Masters of Ceremonies.

O noes! What should I call my Master’s degree now?

And if you think you’ve “mastered” physics? You’re a racist.

OK–I actually agree with the sentiment that “political correctnessâ€ can border on the ridiculous. I’m just not sure this is one of those cases.

No one is suggesting condemning perfectly legitimate uses of the word master.

But just the way the broken Nazi cross existed as an ancient symbol that long pre-dated Hitler, no one today could see the symbol and think of its pre-1930’s context. It has been thoroughly identified with Nazi ideology.

According to the New York Daily News, Yale University Professor Stephen Davis, who is white, published the following in the Yale Daily News: “I think there should be no context in our society or in our university in which an African American student, professor, or staff member–or any person, for that matter–should be asked to call anyone ‘master.â€’ Davis has rejected the term, opting instead to be known as “headâ€ of Yale’s Pierson College.

Although using the term master as a way of connecting to the academies of medieval Europe has a sentimental and historical resonance to it, the fact is the U.S. practiced a system of chattel slavery that co-opted the term in a way that had nothing to do with academia, and everything to do with racist ideology.

In a country that has consistently maintained a black underclass, I think there are other ways that our best universities can cling to traditions of the academy–ways that are ennobling and edifying, and that in no way hark back to desperate times of brutal enslavement.