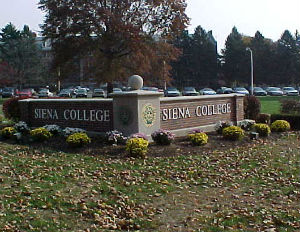 A Siena College student is getting national attention for inventing a device to help train dogs and it could end up on Wal-Mart shelves, according to YNN.

Chad Bingo, 20, a Western New York native, created a button which will allow a pet to notify the owner when they would like to go outside. Bingo entered the product into Wal-Mart’s “Get on the Shelf” contest. Having made it past the first round, he’s now hoping to advance with the help of voters.

Bingo got the idea from his own dog at home.

“When Gracie was a puppy, we thought it would be a funny idea to put the Staples ‘Easy’ button by the door just as a joke and said, ‘Oh we’ll train her to push it’ and didn’t really think anything of it; and about a week later we were sitting around the table eating dinner and she actually did it,” Bingo said.