Sign Up Your Girl for Summer STEM Fun at NYC Intrepid 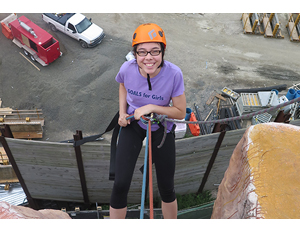 The GOALS for Girls Summer Intensive is a free six-week program for eighthÂ and ninth grade girls. Fifty girls are selected to participate in hands-on experiences, field trips, and conversations with influential women currently in STEM fields. The program focuses on aerospace science, Earth science, and engineering; providing a range of study that appeals to different student interests.

Designed to foster critical-thinking skills; social and emotional development; and parent/guardian support, the GOALS program is particularly targeted to girls from high-need, low-income areas. Some of the benefits of the summer workshop include:

Eligibility for the program is attending a New York City school; being a girl in eighthÂ or ninth grade; and a willingness to commit to the six weeks as well as weekend experiences during the school year.

Some of the activities from last year’s programÂ saw adventurous girls dissecting a sheep’s brain; extracting and visualizing their own DNA at Rockefeller University; sailing on a schooner at the South Street Seaport; and even rock climbing and rappelling off a 60-foot wall. The summer’s program ended with a sleepover party on the Intrepid’s vast and famous hangar deck.

Applications can be downloaded or completed online.Â Students have the option of having a teacher also provide a recommendation. Applications are due March 20th. The program officially kicks-off on July 10th.