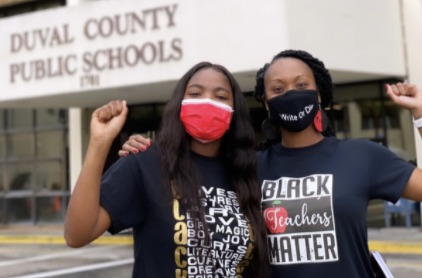 Six public schools in Fla. will undergo a name change in Jacksonville, Fla., because they were named after Confederate leaders. Twitter photo credit- @EduWriterGrind

“Keeping the names of Confederate generals in our children’s schools is a slap in the face to every African American that attends these schools,” Wells Todd of Take’Em Down Jax told The Florida Times-Union. “Those that oppose the names being changed are acknowledging their support for the Confederacy and all that it stood for.”

First Coast News pointed out that changing school names includes various steps which require money to cover needed expenses, although funds must only come from private funding or beverage contracts. The Jacksonville Public Education Fund said that it is chipping in by helping with renaming expenses. Needs include raising money to cover paint, uniforms, signs, and even gym floors. The fund is serving as a fiscal agent and private donations are allowed.

The debate over school names is far from over. Next up for consideration: schools named for individuals who negatively impacted indigenous people. The Florida Times-Union also reported that Andrew Jackson High School, Jean Ribault High School, and Jean Ribault Middle School are additional schools under consideration on a new renaming list.

A bill introduced by Ashley Smith-Juarez entails beginning a process since renaming is not automatic. Opinions about how to proceed will be voiced by Superintendent Diana Greene,  community members, students, and even PTA groups.

“We began with six schools named for Confederate officers. We should continue with schools that are named for people responsible for systematically marginalizing and killing Indigenous people,” Smith-Juarez said, according to The Florida-Times Union. “It is the place and time in the history of our city and our school district that we are engaging in the process of enacting the renaming policy for alignment to the mission, vision and core values of Duval County Public Schools.”