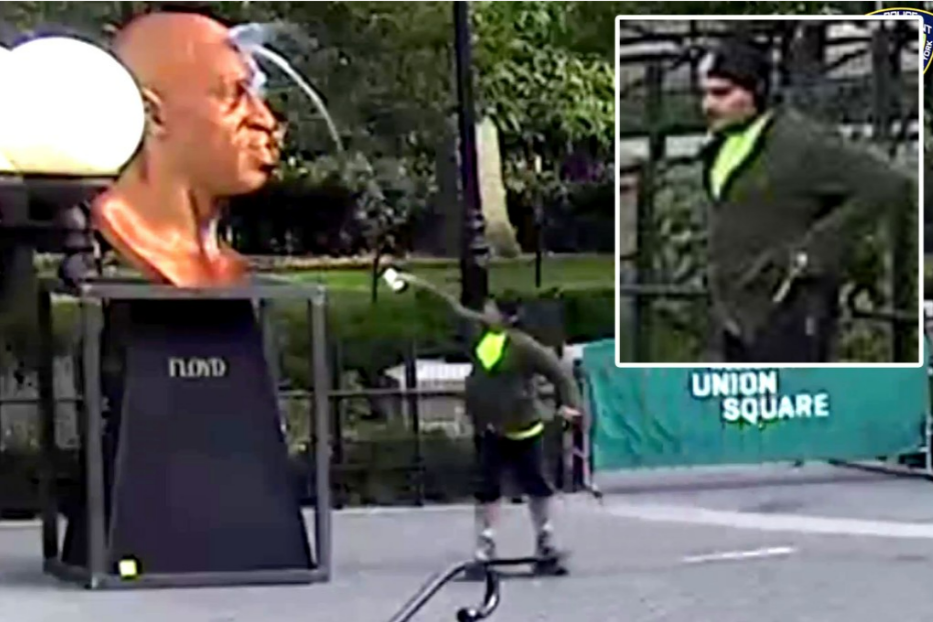 The Floyd sculpture had just been unveiled along with statues of Rep. John Lewis and Breonna Taylor. It was the second time the Floyd statue was defaced after being first erected in Brooklyn on Juneteenth. However, on June 24, the Floyd sculpture was vandalized with black paint and a white supremacist symbol.

“I heard the news about the vandalism. I was so proud that I got word that Flatbush held it down. They really supported us, looked out for the statue, looked out for the spirit of my brother,” Floyd’s brother Terrence said at the time. “You try to stop us, but you can’t stop us. And we’re still going to continue, with love.”

Video captured the latest vandal seen tossing gray paint on the face and base of the Floyd bust and fleeing the scene. Footage shows an adult and child were nearby when the skateboarder vandalized the Floyd statue, NY Post reports.

Photos show gray paint dripping from the top of the Floyd bust down to the bottom.

#BREAKING: an organizer from the non profit We are Floyd tells me the George Floyd statue in Union Square was vandalized. It was also vandalized at its former home in Brooklyn. @NY1 pic.twitter.com/H8LUM94dFU

The Floyd sculpture is one of three created by the artist Chris Carnabuci sitting in Union Square, BBC reports. The designer spoke out against the latest vandalism against his work.

“Vandalism of any sort is not an action that is productive or meaningful,” Carnabuci said. “Actions like this remind us that we have a long way to go.”