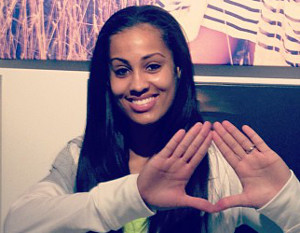 Rapper Jay-Z recently launched Roc Nation Sports, a sports management company with the goal of signing the best and the brightest futureÂ athletes. The rapper even went as far as selling off his portion of the Brooklyn Nets, as to avoid any potential conflicts with his management role.

The WNBA’s Tulsa Shock player posed in a photo making the “Roc-A-Fella Diamondâ€ on the same page as the announcement.

No financial details have been revealed about the signing.