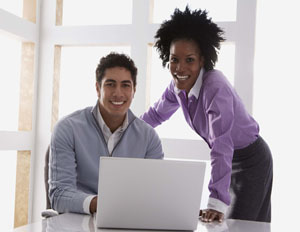 Before Christopher and Dr. Lezli Levene Harvell (not pictured), co-founders of Newark-based Dental Kidz LLC were awarded BLACK ENTERPRISE’s Family Business of the Year award in May 2012, the duo took part in a program that helped the dental practice network with other entrepreneurs while also providing access to capital opportunities. And that program is looking for urban businesses to participate in it.

Inner City Capital Connections (ICCC) is a free national program designed to drive the growth of inner city companies. ICCC, a non-profit organization, shows companies how to tap into sources of capital, educates them on their financial options, and provides a forum where entrepreneurs can connect with investors. “It’s been going since 2005 and the genesis of the program is from the research here that we did where it demonstrates that there’s a large gap for the companies in under-served locations to be able to access capital,â€ says Hyacinth Vassell, Manager, Inner City Capital Connections. “So the program is put together to basically help to minimize that gap.â€

The program includes classes where entrepreneurs can raise their financial sophistication and other topics that affect their ability to be able to access capital — such as finance, strategy, marketing, HR. Participants are coached by small business bankers and investors in order to perfect pitches and gain a better understanding of how bankers conduct businesses evaluations. “It’s full day of immersion training in capital readiness so to speak,â€ says Vassell. “And it helps these businesses to prepare for the conversation that they will have at the conference, where we then match these businesses with capital providers and that’s alternative funding, debt providers as well as equity providers.â€

To be eligible for the program, a business must be located in an under-served area — defined as one with a 20% or more poverty and a higher unemployment rate than its surrounding metropolitan statistical area. The business should also have generated $2 million in revenue as of 2010. However, “We have taken companies that are smaller in the training,â€ says Vassell. “Because we feel there is demonstrated growth that is happening and it’s a critical point for them to begin to do the training.â€ The ICCC has an application and nomination form on their website.

Five of the companies that participate in the program will be invited to participate in a conference where they will pitch their companies to an audience of investors as well as fellow entrepreneurs. While attending the conference is free, travel and lodging for the New York City event is not covered. “It provides the businesses to be able to get that peer-to-peer learning as well as get the learning from the practitioners as well,â€ says Vassell. “These five companies will pitch to the entire audience and then they will get instant feedback from a panel of investors.â€

Even though Christopher Harvell earned an MBA from Columbia University, the co-founder of Dental Kidz gained insight from participating in the program. “One of the things was being in an environment with other entrepreneurs; some with businesses at the same stage as our business; some who have been in business for 20-plus years, was priceless,â€ he says. “The other valuable piece was the match-making and being able to be in a room with different capital providers, whether it be angel equity providers or different tiers of debt providers.â€