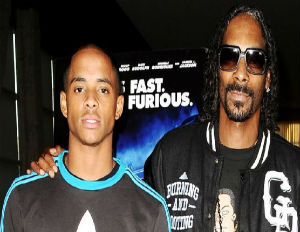 Cordell Broadus, 17, son of Calvin “Snoop Doggâ€ Broadus announced Wednesday during College Football National Signing Day that he is accepting the scholarship offer from the University of California-Los Angeles (UCLA) Bruins over his dad’s (former) favorite, the University of Southern California (USC) Trojans and many others.

Broadus announced live Wednesday afternoon on ESPNU that UCLA was the best fit for him as he held up a No. 21 UCLA team jersey. UCLA has a history of landing the children of hip-hop superstars. Justin Combs, the son of Sean “P.Diddyâ€ Combs, wore No. 20 as a defensive back for the 2014-15 season, according to the Bruins’ team roster.

However, Broadus and his dad cite academics and long term goals as the reasons for the choice. Despite previous rooting for his son to pick USC, Snoop said at today’s announcement that as a family they felt that UCLA presented the best platform for his son. Snoop said they feel that UCLA “is going to look out for him when his career is over…that’s what’s important that he gets a degree and an education. Football is not going to be there forever, but life is.â€

Likewise, Broadus stated that he was impressed with UCLA head coach Jim Mora noting that he was fond of his humility and his NFL experience. The Wall Street Journal recently noted that Mora changed the culture of the Bruins by bringing his 25 years of experience as an NFLÂ  assistant and head coach. Last year, Anthony Barr was a first-round draft pick offensive linebacker from UCLA who scored a four-year contract worth $12.7 million with the Minnesota Vikings.

Broadus, with his dad’s strong support is well on his way to being an NFL draft pick in four or five years. The duo have publicly prepared for the young Broadus’ football career on the ESPN mini-series Snoop & Son, which has aired on the network since January.

The show has chronicled Broadus’ high school football career as a wide receiver at Bishop Gorman High School in Las Vegas, NV. Broadus ranked number 130 in the ESPN 300. He received offers from a long list of schools in addition to UCLA to include Arizona State, LSU, and USC.