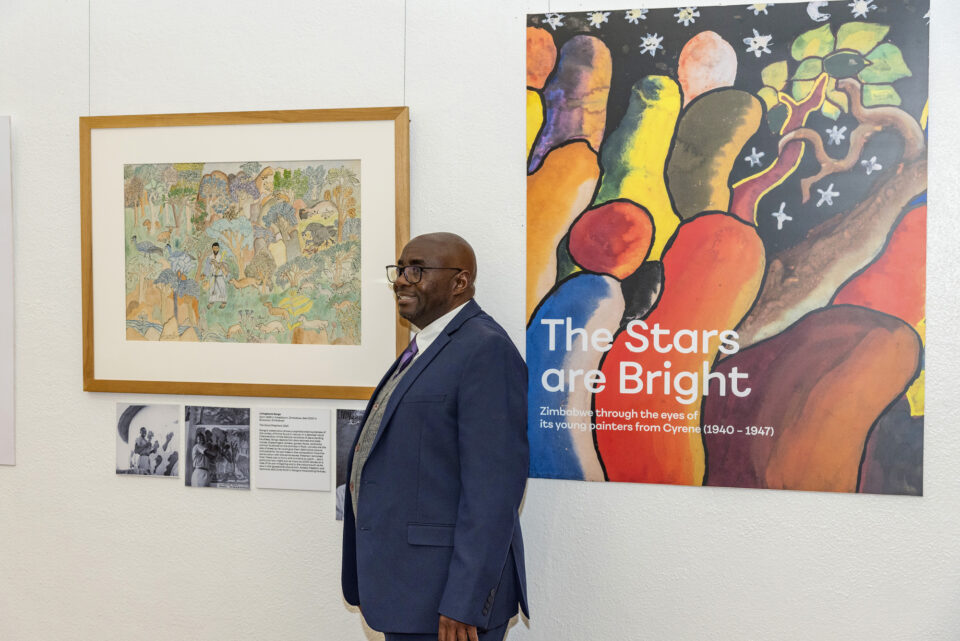 Gift and Livingstone’s artwork “The Good Shepherd” along with historical images of Livingstone as a scholar at Cyrene Mission, taken by teacher Ned Paterson in the 40’s – never seen by the Sango family before. Image Courtesy The Curtain Foundation

“My father used to draw Jesus as Black because God is for all of us. He is not a God of color,” said the 65-year-old, according to AP.

His late father drew the painting in the 1940s, which is currently displayed in a historical exhibit, “The Stars are Bright,” located at the National Gallery of Zimbabwe. The collection was not available in the country for more than 70 years, and this is the first display of his father’s artwork, according to The Washington Post.

Sango placed a picture of his father next to the painting.

“We never knew our father was such a great artist, but after 70 years, we are seeing these pictures. We are being called,” said Sango. “Some of these pictures we had never seen before. I am seeing my father as a boy.”

Sango’s father reportedly studied taxidermy and had a successful career working with the National Museum in Bulawayo.

The captivating art show at the National Gallery lasts until the end of October and is comprised of paintings created by Black students in the 1940s and 1950s at Cyrene Mission School. The mission school was the first art institution to provide art instruction to Black students in the white minority-controlled Rhodesia, the Associated Press reports.

The works of art are filled with vibrant, bright colors paired with striking brush strokes that capture African life in dance, mundane activities like household chores, and hunting wildlife juxtaposed against the rising modern world of railroads and electricity lines. According to the Associated Press, the paintings also showcase African folklore and Biblical tales, introduced to Africans by western colonization.

Britain’s King George VI instantly became a fan of the students’ work when he visited them in 1947, and a portion of the collection of the work was shipped overseas for display in London, Paris, and New York. According to The Washington Post, some paintings were sold to help finance the school.

A Zimbabwean discovered the forgotten paintings and recognized the name Cyrene on boxes in the basement of St. Michael’s and All Angels Church in London, according to an official statement by organizers of the exhibition in Harare.

“It was a very difficult time in the 1940s. It was the height of World War II, and it was the height of colonialism in Zimbabwe,” Lisa Masterson, curator of the exhibition, said. “For a white Anglican priest to empower young Black students with new skills and belief in themselves was completely revolutionary in those days,” she said. She also complimented the school’s prudent founder Edward Paterson for making art a required subject.