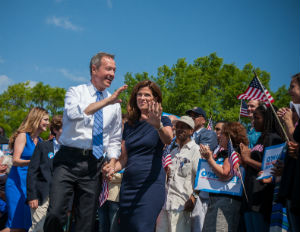 In a meeting Aug. 4 with South Carolina’s HBCU leaders, former Maryland Governor Martin O’Malley, who is a candidate to win the Democratic nomination for president, spoke about his plan to bolster HBCUs, develop a debt-free college plan, and commit to greater investment in community colleges.

After enjoying lunch with leaders of the state’s HBCUs, O’Malley addressed the group. “No other nation on the planet saddles her college graduates with as much debt” as the U.S. does, he said. Previously the country recognized the need for publicly financed universities, but that over the last 20 years “the federal government has been cutting investment in higher education,â€ as has state government. He said that the mountain of debt in tuition bills has been “dumpedâ€ on the “backs and balance sheets of families across America.â€

O’Malley also spoke pointedly of the need to support HBCUs. He said many students at HBCUs are the first in their family to go to college. “They face greater economic burdens and come from families of more humble means.â€ He said one answer is to invest in HBCUs the same way that community colleges are being invested in–that the two types of institutions need to be linked because of their similar missions.

If he is elected president, O’Malley’s goal is to provide a college debt-free plan option. His plan includes the following:

He also does not think HBCU students should be unreasonably restricted from student loan programs. HBCU enrollment declined when restrictions on PLUS loans were tightened.

Although taking on unreasonable debt isn’t the answer either, increasing Pell grants and restoring higher education funding would relieve some of the load families are carrying and make college a more affordable option.

In mid-July, O’Malley was booed and criticized for using the expression “All lives matterâ€ in response to a predominantly black audience that chanted “Black lives matter.â€ He apologized later the same day.

On July 31, at the National Urban League conference in Florida, he spoke at length on the need for criminal justice reform. He also released a white paper detailing his position after consulting with prominent figures in the field, including President Obama’s task force on 21st-century policing.