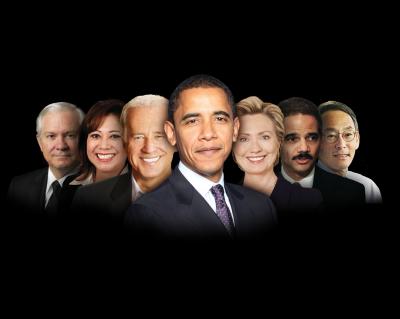 Much has been made of President Barack Obama’s assemblage of “a team of rivalsâ€ for his first-term cabinet. Political observers compare his choices of Joe Biden for vice president and Hillary Clinton for secretary of state–fierce competitors for the Democratic presidential nomination–as an indication of the same political genius President Abraham Lincoln demonstrated when he selected political opponents to serve in his administration 148 years ago.

Grappling with a nation divided by civil war and the issue of slavery, Lincoln wanted access to the country’s best minds to help him preserve the Union. He believed he would receive candid, straightforward advice from his critics. It is true that Obama has taken a page from his political hero’s book, but his cabinet and White House staff represent so much more.

Consider them the Obama Dream Team, a diverse cadre of accomplished, well-educated public servants–many of whom served in the Clinton administration–equipped to take on America’s unprecedented economic, national security, and environmental challenges. We offer this snapshot of Obama’s White House staff and cabinet-level choices, looking at them through the lens of his policy priorities. (As of press time, a commerce secretary had not yet been chosen.)

Name: Greg Craig
Position: White House Counsel
Past Position: Partner, Williams & Connolly law firm; Special White House Counsel for President Clinton
Value: The only attorney to represent a president (Clinton) as well as a would-be assassin of a president (John Hinkley, who shot Ronald Reagan), this ultimate Washington insider is a foreign policy maven who can nimbly maneuver through a maze of complex legal and political issues.