How Andre Walters Went from Jordan's Camp to Making Apps 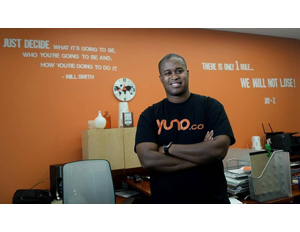 One would think that working as an attorney for Michael Jordan‘s NBA franchise team, the Charlotte Bobcats (now, Hornets), would provide a significant measure of having made it in life. While AndrÃ© Walters enjoyed his work as a lawyer, he could never quench the thirst for entrepreneurship, stoked from an early age.

In 2013, Walters launched a tech startup, Yuno, an e-commerce-meets-social media platform that rewards users financially on every purchase and for influencing the purchases of their online followers.

[Related:Â 6 Lessons Entrepreneurs Can Learn From the Musical ‘The Wiz’]

Walters got the idea for Yuno after watching the movie about Facebook’s beginnings, The Social Network. “I was floored,â€ Walters says. The movie affirmed for him that world-changing ideas come from simplicity.

“In Facebook’s case, they had the simple thought of connecting the entire world.Â  In Yuno’s case, I realized that people had tremendous influence and value within their social circles.Â  If they could figure out a way to extract that value then they could enhance their lives financially,â€ he says.

He put $30,000 of his own money into starting Yuno before gaining an angel investor who invested $200,000. “We figured out how to put a pitch deck together and we detailed what our plans were for Yuno.Â  I think they liked the idea but believed even more in our ability to execute. We used convertible notes for our early investors so they each expect a percentage of the company in accordance with our agreements with them,â€ he says.

Currently, Yuno has five, full-time employees and a designer, developers, and a marketing consultant. It started out with 200 users and now has over 1800. Yuno earns commissions on every transaction that occurs on its site. Commissions range on average between 8% and 10% per transaction from some of the biggest brands, but many of the deals are negotiable and can often be much higher.

The Yuno staff is dedicated to opening up relationships with the companies they choose to work with.Â  “We try to look for those companies that provide the types of products we feel best fit our target market,â€ Walters pointed out.

On the roadmap is a Yuno iOS and Android app to accompany the website, due early next year, as well as new marketing initiatives.