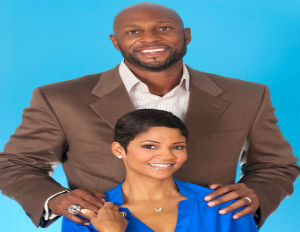 Two days before Valentine’s Day, NBA veteran and former Miami Heat player Alonzo Mourning and wife of 17-years,Tracy hosted a conversation to uplift women entitled the “Power of Influence Through Sisterhood.â€ The event was a charitable event to support Honey Shine, Inc. mentoring organization, one of the charities under the Mourning Family Foundation (MFF), which is headed by the couple.

[Related: No World Series Title After All]

The heartfelt discussion was led by Tracy Mourning, MC Lyte, hip-hop pioneer, and founder of Hip Hop Sisters Foundation and Gayle King, co-anchor of CBS This Morning. Hubby Alonzo looked on from the edge of the lounge booth as his wife opened the discussion with a call to action for the women in the room to counter the ‘attack taking place’ on the image of black women in entertainment and sports with such shows as VH1’s Basketball Wives.

Tracy went on to counter the negative image of men as well. “My husband is a great example of what a real man is,â€ she told the gathering. “He takes care of his family and his nature is to serve and to give back,â€ said Tracy.

In an offline chat at the event, Alonzo praised his wife to BESportsBiz, stating ” It’s uplifting to have someone who loves you and fights for you and has your back. It’s a team effort. We are 17 years strong, really 27 years (including before marriage),â€ said a proud Alonzo.

Since 1997, the couple has raised more than $10 million through the Mourning Family Foundation that aids in the development of children and their families, particularly those in socioeconomically challenged communities.