St. Louis Police Upset At Rams For 'Hands Up' Protest 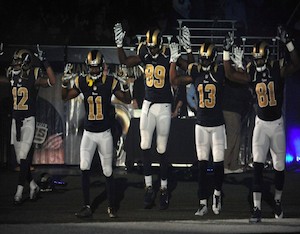 UPDATE: The NFL and St. Louis Ram sources say that the five players who entered with their hands up in the “don’t shoot” poses will not be fined for their actions. “We respect and understand the concerns of all individuals who have expressed views on this tragic situation,” NFL spokesman Brian McCarthy told USA Today.

Five united St. Louis Rams football players stood against racism and injustice as they took the field in what has become a controversial pre-game introduction. Tavon Austin (#11), Kenny Britt (#81), Stedman Bailey (#12), Jared Cook (#89) and Chris Givens (#13) —all African American— came out to the Edward Jones Dome with their arms raised.

Their very visible protest was an attempt to show compassion and solidarity for those still protesting in the St. Louis suburbs of Ferguson, where 18-year-old Michael Brown lost his life to police officer Darren Wilson. “I just think there has to be a change,” tight end Jared Cook said after the Rams’ 52-0 demolishing of the Oakland Raiders on Sunday. “There has to be a change that starts with the people that are most influential around the world.”

Responding to the Rams’ gesture were the St. Louis Police Officers Association, who wrote in a statement, “[We are] profoundly disappointed with the players for a display that police officers around the nation found tasteless, offensive and inflammatory.” The association also urged for the National Football Association to discipline the protesting players. The St. Louis Rams’ coach, Jeff Fisher, admitted that he was not aware of his players planning to do the “Hands Up, Don’t Shoot” gesture before taking the field.

“I don’t want the people in the community to feel like we turned a blind eye to it,” Britt said. “What would I like to see happen? Change in America.” The tragic events that led to Michael Brown’s demise closed with Officer Wilson being cleared of all charges. The effects of those circumstances were played out during Sunday’s game when Tre Mason scored on an 8-yard run in the fourth quarter. With the score 45-0, both Mason and Britt raised their hands together to continue their solidarity with the Ferguson protesters. “It touched a lot of us. It added fuel to our fire,” Mason later said.

Across from the stadium, about 75 protesters gathered and chanted, “Hands up, don’t shoot!” and “No justice, not football!” All the while, 30 police officers dressed in riot gear watched from a distance. The Rams had extra security measures in place for the game, including armed personnel from the National Guard. The St. Louis Police Officers Association’s union business manager, Jeff Roorda, tacks on a note to their statement, writing, “I’d remind the NFL and their players that it is not the violent thugs burning down buildings that buy their advertiser’s products. It’s cops and the good people of St. Louis and other NFL towns that do. Somebody needs to throw a flag on this play.”

For those who haven’t been following this story closely, Roorda is a former police officer who has stringent views that have become popular in the wake of Brown’s death. This includes the idea that police should wear body cameras and advocating for legislation that would keep the names of police officers involved in shootings secret unless charges were brought against them.

Watch highlights from Sunday’s game and protest below: