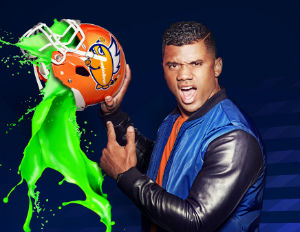 Last year, Nickelodeon expanded their ever popular Kids’ Choice Awards programming into the world of sports. Their first foray, the Kids’ Choice Sports Awards, was a huge success and provided many memorable and laugh out loud moments. Host Michael Strahan and a ‘football teams worth’ of popular presenters from the sports and entertainment world guided the audience, young and old, through a night filled to the brim with talent and slime – capped off by the night’s Legend Award winner David Beckham and his two sons, Romeo and Cruz, being covered in gold goo.

In the year since, Nickelodeon has doubled-down on it’s sports interest – launching the promising NickSports last September and reaching out to last year’s winner of the Clutch Player of the Year Award, Carmelo Anthony, for creative direction on a Teenage Mutant Ninja Turtles product line.

Some of tonight’s categories to look forward to include: Best Male and Female Athlete, Clutch Player of the Year, King and Queen of Swag, and Don’t Try This at Home Award. This year’s Kids’ Choice Sports will also feature daring, slime-filled sports stunts and top athletes competing outside their sports realm for a Kids Choice Sports trophy.

As if that’s not enough – throughout the night, the show will feature can’t-miss performances by Taylor Swift, Chris Brown, Justin Bieber and Skrillex, and Nick Jonas.