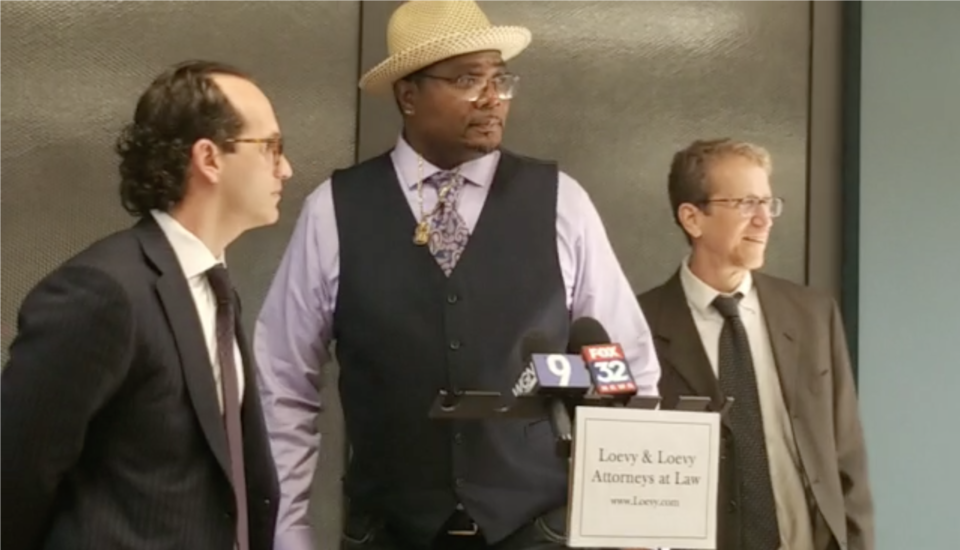 Keith Cooper speaks about the historic settlement during a press conference in Chicago on Wednesday. (Image: Screenshot/Facebook)

Chicago native Keith Cooper, 46, spent seven years behind bars in an Indiana maximum security prison for a 1996 crime he did not commit. Now, the city of Elkhart is writing a hefty check of $7.5 million – the largest the state has ever seen – to settle his wrongful conviction lawsuit after serving time for armed robbery and attempted murder.

According to Indiana Public Radio, the lawsuit alleged fabricated testimony, manipulation of witnesses, and dismissal of integral DNA evidence that proved his innocence.

“Mr. Cooper’s wrongful conviction did not happen by accident nor was it an aberration,” said Cooper’s attorney, Elliot Slosar, in a press release. “Through this case, he has paved the way for other wrongfully convicted people from Elkhart to get a fair chance at justice.”

Cooper was pardoned by the governor in 2017, the first to do so for actually being innocent. Per the outlet, he will receive about $1.1 million for each year he was wrongfully imprisoned.

“Keith Cooper not only has his name back, but he has exposed Elkhart’s epidemic of wrongful convictions over the past five years of civil litigation,” said Slosar.

Cooper spoke about the historic settlement during a press conference in Chicago on Wednesday, sharing that although he would never get back the time he spent in prison, the money can help others wrongfully detained to prove their innocence.

“It helps me to build a better tomorrow with my family, and for that I am grateful,” he said. “And for all those other Keith Coopers out there — keep your hopes and faith, because we’re here to help.”

After Cooper’s attorneys called for a special prosecutor review for investigators involved in his sentencing, including former Detective Steve Rezutko and former Police Chief Ed Windbigler, Rezutko left the force and committed suicide a day before responding to sanctions filed on Cooper’s behalf.

It was discovered the ex-detective paid informants for sexual acts.

Due to advancements in DNA testing, it was revealed in 2002 that Johlanis Cortez Ervin was responsible for the crime, clearing Cooper, although it took 15 years to exonerate him.

“This litigation exposed the systemic pattern of police and prosecutorial misconduct that exists in Elkhart, Indiana,” said Slosar.