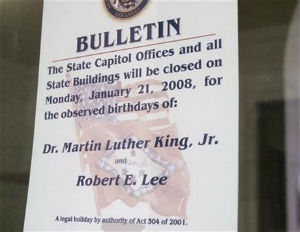 While the Selma cast traveled to Alabama to march on Martin Luther King, Jr. Day and President Obama along with his staff honored the civil rights leader with a day of community service, residents in Arkansas, Alabama and Mississippi split King’s day of honor with that of Confederate General Robert E. Lee.

Yes, you read that correctly. These three southern states have made the federal holiday honoring King’s legacy a joint holiday to celebrate the life of the leader of the Confederate Army and they communicated that clearly by posting signs and notices on the front of government buildings on Monday.

In the state of Arkansas, a few legislator’s have proposed a bill to make the day a singular holiday that honors the civil rights leader by himself, with Rep. Nate Bell saying that honoring both men on the same day highlights racial divide.

“There are people who profit from racial division,” said Bell. “It needs to be off the table.”

Despite Bell and other state legislators making an attempt to remove Lee from being celebrated on the same day as King, the governor of Arkansas, Asa Hutchinson, has yet to commit to making the necessary changes.

“I haven’t thought about it, so I would have to give it some more thought,” said Hutchinson. “History is important to me and we’ve just got to balance those, obviously.” 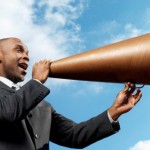 How To Build Relationships With Brand Advocates