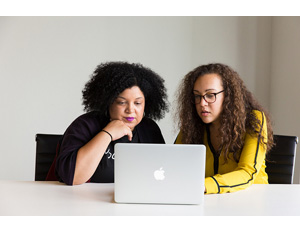 While creating a website, Christina Morillo and Stephanie Morillo (no relation) noticed something. There are few stock images of women of color in technology on the Internet.

The website they were building, ironically, was born from a Twitter chat, #WOCinTech Chat, in which the two and several other women were discussing their feeling of isolation as women of color in tech.

“When we were creating our website, I noticed that there were few stock images of women in color in professional and technical settings,” said Christina. “So, I decided we should hold a shoot, made up of women of color who actually work in the tech industry, with the idea that people could use these images in all of their materials.”

They put out a call for models on Twitter and through their mailing lists. The models are entrepreneurs, marketers, software engineers, security professionals, developer evangelists, and designers. They quickly set about looking for sponsorship and found it. The first photo shoot was done by photographer Mike Ngo and was sponsored by Digital Ocean and Miss Jessie’s.

The first batch of #WOCinTech photos is available under a Creative Commons (attribution) license. They can be freely copied, distributed, and displayed as long as #WOCinTech Chat is attributed.

Christina explained, “Making money was never the goal. We wanted people to start using them, not to just be told, ‘Good job!’ We didn’t want people to have an excuse not to use them and good-quality, royalty-free images of women in color are still rare in the space. We just wanted to remove any barriers.”

“Visibility is important,” said Stephanie. Especially for young girls or mid-career professionals who want to see themselves in the industry, she noted.

They are both pragmatic about their project. “We aren’t naÃ¯ve. It will take more than stock images to change perceptions and attitudes, but this is a first step,” Stephanie said.

And people are responding. Power to Fly, a startup which helps women find tech jobs from which they can work remotely, started using #WOCinTech Chat’s images on its Twitter feed, app, and website. They are also getting tweets from people saying that they used their stock images in presentations and blogs.

Christina says that in addition to showcasing women of color performing a variety of technical and professional tasks, the images are “general enough that they work well across a number of industries and can represent people having an interview, a meeting, a brainstorming session,” and more, she said.

For women of color in STEM who would like to participate in a #WOCinTech Chat photo shoot, keep an eye on @wocintechchat’s Twitter feed for the next photo sheet details or drop them an email at hello@wocintechchat.com.

Click through the following pages for some of the images from #WOCinTech Chat: Next–>